Should we be afraid of nuclear power? 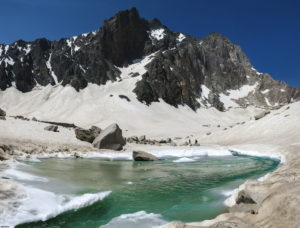 It’s a miracle battery. For billions of years, this steady heat has kept the Earth’s core liquid, allowing the magnetic field and the atmosphere to exist. Without radioactivity, we wouldn’t be here.

Nuclear fission converts matter back to energy, and so offers an extremely concentrated source of power. Because it does not generate carbon pollution like fossil fuels, nuclear power has unique potential for solving climate change.

Many energy experts – and climate scientists like James Hansen who best understand the magnitude of the challenge – have concluded that decarbonizing the world economy by 2050 requires a major expansion of nuclear power worldwide, among other actions.

Yet preventing nuclear from going truly mainstream is a widely shared misperception.

Why this fear of nuclear power?

Nuclear power is uniquely suited to decarbonization. It is the most practical replacement for coal, which is the world’s leading energy source, because it provides round-the-clock power. And it is so concentrated that it can expand rapidly. France switched its grid from fossil fuel to nuclear power in just 15 years, halving its electricity costs compared to Germany.

Objectively, nuclear power is far safer than other energy sources and it has far smaller and less dangerous waste streams. Built at scale, it could also be affordable.

Yet, fear of nuclear power is widespread. A substantial bloc of public opinion opposes nuclear power in many countries, driving a policy framework that tries to regulate radiation to zero, making nuclear power needlessly complex and expensive. That fear is thus a major obstacle to a nuclear power expansion that might quickly displace fossil fuels.

In reality, low levels of radiation are not harmful. We live in a soup of natural radiation every day, and radiation levels vary from place to place. A radiation hotspot, in Ramsar, Iran – which is the site of radium hot springs – has more than 50 times the world’s average level of radiation. Yet local people show no adverse health effects despite living there.

The whole fear of low-level radiation, and the regulatory framework that accompanies it, comes from extrapolating down from very high levels of radiation, specifically the atomic bombings in Japan in 1945. Fatally high radiation levels were also received by workers sent into the heart of a radioactive meltdown without protective gear, in Chernobyl in 1986.

By contrast, radiation from the 2011 Fukushima accident did not kill anyone. The tsunami did. Members of the public never received radiation above the safety level set for medical and industrial workers, which is far below the level in Ramsar in Iran. Yet an epidemic of fear ensued.

In response to the nonlethal “disaster” of Fukushima, Japan closed all nuclear power plants and turned to coal to help fill the gap. The smoke from that additional coal has now killed an estimated 10,000 people. Worldwide, coal pollution kills something like a million people a year, and sickens many millions more. Nuclear power could save these lives if people didn’t fear it so much.

Phobias about radiation are rooted in the generational trauma of the Cold War threat of civilizational annihilation by nuclear weapons. Radiation was one of the distinctive features of nuclear war, and its danger was played up by opponents of the arms race in the 1950s.

Hollywood picked up the theme with dozens of movies about the dangers of nuclear radiation. Pop culture created nuclear-empowered monsters like Godzilla and radioactive superheroes like Captain Atom. Films like The China Syndrome and Silkwood painted the nuclear power industry as nefarious entities endangering the public for profit. Breathless news coverage of nonlethal accidents (Three Mile Island and Fukushima) contrasts with sparse coverage of the health effects of coal and other fossil fuels.

The one actual lethal nuclear power accident in 60 years, at Chernobyl in Ukraine, got its own HBO mini-series more than 30 years after the event, generating a new round of anxiety about nuclear energy. Television has also spawned mutant creatures like the three-eyed fish living near the nuclear power plant in The Simpsons.

There is no such thing as “no thresholds, no safe dose”

The idea of low-level radiation causing harmful mutations is a dated notion, however. In the 1920s, American geneticist Hermann Muller showed that high doses of radiation could damage genes in fruit flies. He received the Nobel Prize in 1946 at a time of concern over nuclear-weapon radiation effects. Muller also believed that even very low doses of radiation would harm genes.

But Muller tested only high doses, and then extrapolated the effects to low doses along a straight line with no threshold – no “safe dose.” Later science did not back up this view. In fact, the structure of DNA turned out to be a double helix, with self-repairing mechanisms for everyday radiation damage.

Modest variations in radiation levels are unlikely to harm our bodies, which evolved on a planet filled with uranium and bombarded by both sunlight and cosmic rays.

Death and disease result only from high radiation exposure. By analogy, regular jumps up and down to and from a small height will probably strengthen your legs, but one single jump from a large height will likely kill you.

Yet according to Muller’s “linear no-threshold” hypothesis, they are equivalent jumps. And, incredibly, that principle guides safety regulation for nuclear power reactors to this day.

Radiophobia reaches its ultimate conclusion in the widespread aversion to nuclear waste. Spent fuel contains radioactive elements that will emit radiation for hundreds of thousands of years. And however careful we are in burying it, it cannot be guaranteed that it will remain isolated from the biological world for that long. True enough, but this ignores three important considerations.

First, the volume of waste is extremely small because nuclear power is so concentrated – thousands of times smaller than the coal waste that is produced now because we don’t replace coal with nuclear. In fact, all the spent fuel from America’s 60 years of nuclear power production would, if collected, fit in a Walmart.

Second, the lethally toxic arsenic, lead, and mercury in coal waste lasts forever – even longer than slowly decaying nuclear waste – yet we dispose of it heedlessly.

Third, and most importantly, when bits of radioactive material leak out in the far future, they are unlikely to harm people or ecosystems much, but will have only low-level, local effects. This is because radioactivity is actually not like a virus that can “get out” in the world and destroy everything.

The potential harm from nuclear waste, thousands of years from now, in no way compares to the ongoing harm from coal waste, nor to the disaster that climate change will inflict on coming generations.

The post Should we be afraid of nuclear power? appeared first on Sustainability Times.