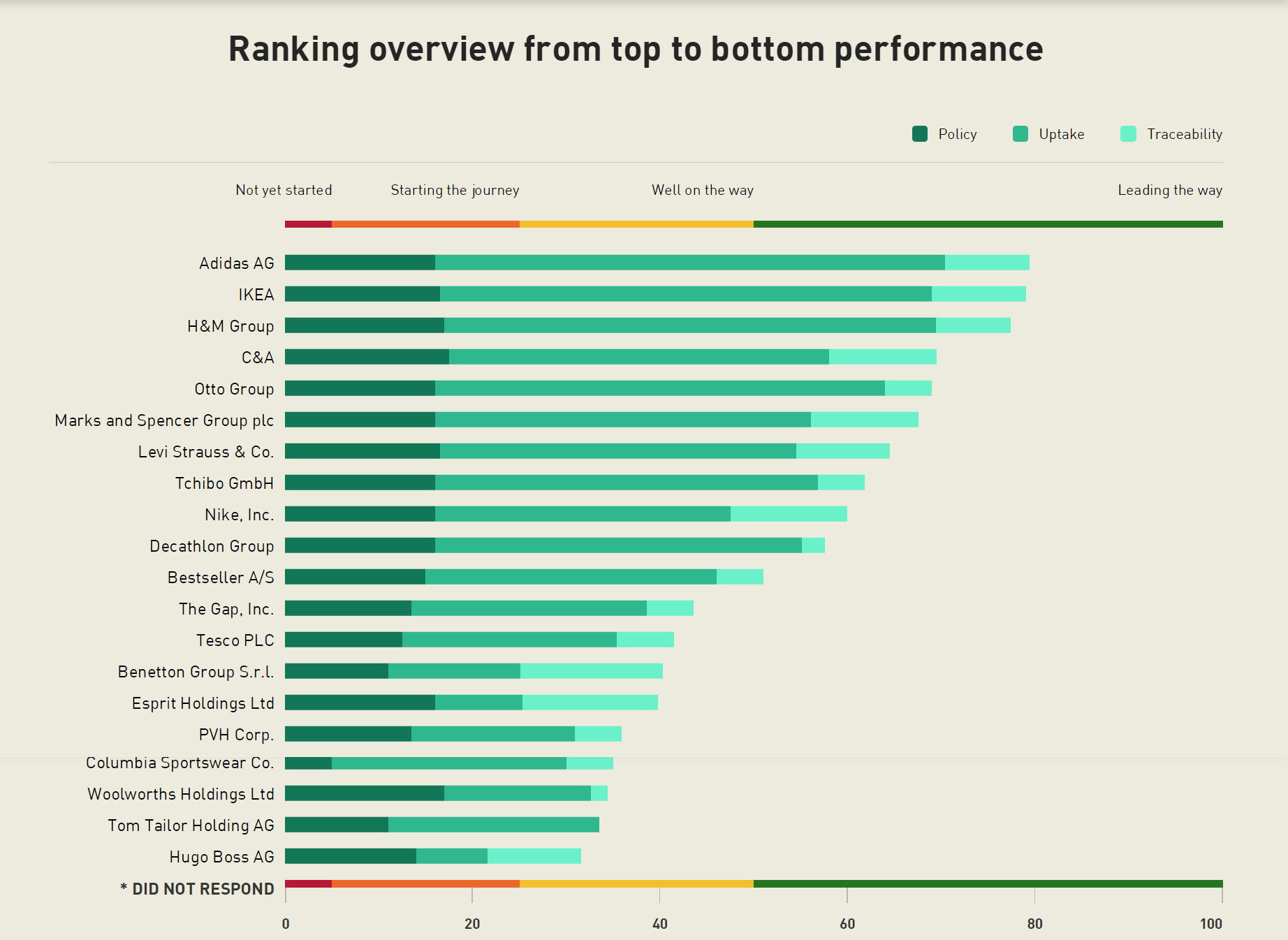 Cotton is one of the most widely produced textiles, yet its impacts on the planet aren’t widely known. Cotton production can be made more sustainable and a new report explores what key market players are doing in this regard.

The third edition of the Sustainable Cotton Ranking 2020 report assessed the cotton sourcing policies of the largest 77 companies that use over 10,000 metric tons of cotton lint a year. The analysis included apparel brands, supermarket chains, and department stores, most from Europe and North America.

The scores were assigned in three categories: policy, uptake, and traceability. Companies were accessed based only on publicly available information to underline the importance of transparency, excluding “commercially sensitive” information. The complete methodology and the questionnaire are provided on the report’s website.

The publication is part of an emerging movement of niche sustainability reports, focusing on particular topics, materials or issues, such as recent reports on progress regarding sustainable water and energy policies among global corporations. The report was written by a consortium of partners, including the World Wide Fund for Nature, Pesticide Action Network and Solidaridad.

The rankings of companies is based on their progress compared to previous years. Twice as many companies have engaged in better practices compared to just two years ago when the first edition was published, according to the authors. In those two years, the sourcing of sustainable cotton has increased from 21% to 25%, which is a significant improvement for an industry of this size.

Despite ongoing sustainability efforts within the textiles and fashion industries, however, only 11 companies have shown true leadership, with Adidas, Ikea, and H&M topping the list. Previously accused of greenwashing, H&M is trying particularly hard to position itself as a sustainability forerunner, having committed to 100% sustainable sourcing by 2020.

In a featured case study, Harsha Vardhan, global environment manager at H&M Group, comments on the significance of this target: “We see that an external target is an important driver. When you don’t publicly disclose such a target, it’s almost like not having a target at all.”

Phil Townsend, technical lead for Environmental Sustainability at Marks & Spencer, emphasizes the importance of balancing the portfolio of sustainable certification options while making sure the company remains financially sustainable. “You need to keep these costs in mind when you start your sustainable cotton journey,” he notes.

Overall, more than half of the companies assessed have improved their rankings compared to previous years, with Bestseller A/S, Decathlon Group and Adidas AG making the greatest progress since 2017. Brief summaries of each company’s achievements and progress can be viewed on their performance analysis pages.

Despite those achievements, however, the authors of the report highlight that real change is driven by small yet dedicated groups of companies that care a lot about their reputation. Both awareness and readiness to change are still low, with a greater push required from governments, consumers and others.

For example, corporate giants like Amazon or Foot Lockers have not adopted any policies regarding the sourcing of cotton, which can undermine efforts implemented by others. Producers that are less willing to change can simply choose to work with companies that have less stringent sourcing policies. Many companies also lack concrete commitments and avoid disclosing their impacts.

Today, more than 250 million people are involved in cotton production with half of all textiles made from this soft natural material. Cotton production requires vast amounts of water and often relies on chemicals, which pollute waterways. Child labor and forced labor are also endemic in the industry in some countries.