MENA is pondering its energy options 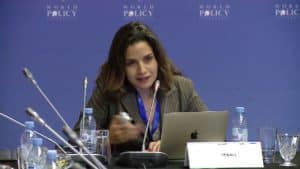 Until not that long ago, the energy needs of most countries in North Africa and the Middle East (MENA) were relatively modest. That’s no longer the case. Rapid economic development and robust population growth across this up-and-coming region have caused energy needs to increase greatly.

Growing demand for air conditioning and desalination, as well as industrial expansion, is especially driving local energy needs. The Arab Petroleum Investment Corporation has estimated that the MENA region will need to expand capacity at 7.4% on average annually, adding 138GW in total. Even as demand for electricity is growing, however, the region’s nations are seeking to wean themselves off fossil fuels in a bid to mitigate the effects of climate change, which is expected to have a marked impact on the environment in an already hot and arid region.

Per capita carbon emissions in Qatar, Kuwait and the United Arab Emirates have been among the highest in the world. Therefore, low-carbon energy sources will be vital and renewables, especially solar, could provide much of the region’s electricity thanks to the ready availability of sunshine all year round. Yet some energy experts stress that enhancing the supply and security of domestic electricity generation can’t be done with renewables alone owing to their inherently intermittent nature. Thus, the diversification of the energy sector will be key to economic stability and prosperity across the region.

Advanced nuclear technology is increasingly seen as a viable alternative to fossil fuels to complement solar and wind in the energy mix. In contrast to the low power density and unit power of renewable energy sources, nuclear offers a means to add significant capacity at speed while not compromising the dependability of supply. For nuclear to come into its own in MENA, however, local governments will need to create favorable market conditions to reap its benefits. The technology requires initial investments that are steep, yet over time nuclear power, if handled well, can be a viable investment. Studies have shown that the system costs of nuclear decrease with a higher market share whereas those of renewables tend to increase.

Still, “It would be too simplistic to pretend that you can compare all system costs and lifecycle costs for these two technologies, particularly as both renewables and nuclear have benefitted one way or another from massive government support in their early days, and both have different roles on the merit curve,” stresses Dr Leila Benali, who is a member of Morocco’s Royal Special Committee for the Development Model, as well as Chief Economist and Head of Strategy at APICORP.

“Over the next 10 years, the massive deployment of grid-scale storage solutions might totally change the current dynamic, particularly in a lower demand growth environment,” she adds.

As matters stand now, however, several nations in the MENA region are seeking to take advantage of the benefits of nuclear technology for electricity generation with hundreds of billions of dollars’ worth of planned investment. Turkey is leading the way by developing the country’s first nuclear power plant in Akkuyu in collaboration with Russia’s state-owned Rosatom energy company. The first unit of the plant is expected to go online in 2023 and Ankara is planning to install several more reactors in coming years.

Meanwhile, the United Arab Emirates, a regional economic powerhouse, expects to meet nearly a quarter of its electricity needs with a new nuclear power plant, which is currently under construction in Abu Dhabi and will consist of four APR-1400 nuclear reactors with a total capacity of 5,600 MW. Jordan, too, is working on a commercial nuclear power plant with several helium-cooled small modular reactors, which is expected to be completed by the mid-2020s. Neighboring Saudi Arabia, which is home to a fifth of global oil reserves, is looking to build a number of reactors for energy generation. Several other nations in the region have expressed a similar desire to launch nuclear energy programs of their own.

Yet the financing of such ambitious nuclear projects in MENA will need to be done judiciously. In November 2015, Russia and Egypt signed an intergovernmental agreement to finance the construction and operation of a nuclear power plant. According to the plan Russia would cover 85% of project costs to the tune of $25 billion via a state-backed loan while Egypt would provide the rest via private investments with an annual interest rate of 3% on Russia’s loan, which would be paid off in 35 years.

A larger role for private financing behind new nuclear has been described as a potential model for the region – and not just for power generation. “It is true that private financing has historically been missed in nuclear power,” Benali says. “One interesting trend in the region could be nuclear for desalination and that could be an area where private capital could be much more active if we see a few projects developing in the region,” she explains.

Ultimately, Benali says, nuclear technology will require not only economic but some societal changes as well. “Given the large share of youth in several countries in the region where they account for more than 70 per cent of the population, the most relevant angle should be R&D-related,” Benali says. “Equally important should be the inducing of a virtuous cycle of attendant technological research related to nuclear with applications extending beyond nuclear power,” she adds. “These should include medical use and desalination projects.”

However, it is clear that the region’s countries will have their work cut out for them if they are to exploit nuclear power technology in a safe and dependable manner. “The main requirements on nuclear cooperation and safeguards on enrichment and nuclear fuel recycling are key [if the region’s countries want] to introduce nuclear,” Benali stresses.

The post MENA is pondering its energy options appeared first on Sustainability Times.