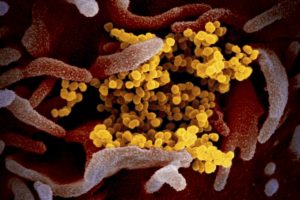 In popular culture bats are routinely portrayed as vile creatures, the minions of evil forces like vampires.

True to form, bats have been in the headlines again as potentially deadly animals. Namely they have been highlighted as the possible host of the novel coronavirus SARS-CoV-2, which jumped to humans in China late last year. The coronavirus causes Covid-19, a disease that has infected millions and killed hundreds of thousands of people worldwide.

Yet the bad reputation of these flying mammals, which have some 1,200 subspecies and account for around a fifth of all mammalian species on the planet, is undeserved. Bats perform vital ecological functions: they pollinate plants, they help disperse seeds in forests and they control insect populations.

There is no denying, however, that they are also possible reservoirs of viruses. In fact, after examining 36 bat species from the western part of the Indian Ocean a team of researchers has recently found that many of them were hosts to unique coronavirus strains.

The scientists took swab and blood samples from more than 1,000 bats from three dozen species on islands in the region as well as some coastal areas in Mozambique in Africa. Eight per cent of the bats they sampled were found to be carrying a coronavirus, the scientists say.

“We found that there’s a deep evolutionary history between bats and coronaviruses,” says Steve Goodman, a biologist at the Field Museum in Chicago who lives in Madagascar and is an author of a new study published in Scientific Reports.

That evolutionary history goes back millions of years.

“We found that for the most part each of the different genera of families of bats for which coronavirus sequences were available had their own strains,” Goodman explains.

“Moreover, based on the evolutionary history of the different bat groups, it is clear that there is a deep coexistence between bats (at the level of genus and family) and their associated coronaviruses.”

The expert cites the case fruit bats in the family Pteropodidae, which can be found on several continents and islands. They live in clusters on trees and are host to coronavirus strains that are different from those in other groups of bats living in the same geographical zones.

“Developing a better understanding of how coronaviruses evolved (in bats) can help us build public health programs in the future,” Goodman stresses.

Simultaneously, another team of researchers at the University of Saskatchewan in Canada has uncovered how bats that carry the coronavirus causing the highly deadly Middle East Respiratory Syndrome (MERS) can do so without getting sick.

“The bats don’t get rid of the virus and yet don’t get sick,” says microbiologist Vikram Misra, who worked on a new study, which has also been published in Scientific Reports. “We wanted to understand why the MERS virus doesn’t shut down the bat immune responses as it does in humans.”

An insectivorous brown bat can stay infected with the MERS coronavirus for months because cells in the mammal’s body and the virus have come to coexist, the researchers say. “Instead of killing bat cells as the virus does with human cells, the MERS coronavirus enters a long-term relationship with the host, maintained by the bat’s unique ‘super’ immune system,” Misra elucidates.

In response to the presence of the MERS coronavirus, a host bat’s cells adapt by maintaining a natural antiviral response rather than by producing inflammation-causing proteins that would make the animal sick. At the same time, the MERS virus adapts to the bat’s host cells by rapidly mutating one of its own genes. The result of these mutual adaptations is that the virus remains dormant for long periods in bats unless the equilibrium is upset by a disease or other stressors, Misra says.

“SARS-CoV-2 is thought to operate in the same way,” the researcher adds.

Needless to say, humans don’t have a similar defense mechanism to novel coronaviruses, which means that pathogens that are relatively harmless in bats can sicken us and kill us with ease.

The post Why bats don’t get sick from the viruses that sicken us appeared first on Sustainability Times.