Insects may not be doomed… if we leave them be 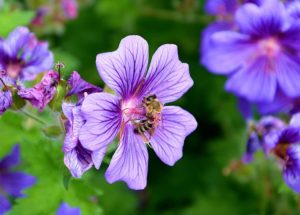 A mass extinction is under way but many people remain oblivious to it. A reason is that it involves insects, which often escape our attention except when they come bothering us.

Apart from honeybees and pretty butterflies, insects tend to be unloved creatures, yet we should be paying them far more heed as their situation is rather dire across Europe, the United States and farther afield. In the United Kingdom, for instance, a third of 353 species recently surveyed, including wild bees and hoverflies, are found to have declined across their ranges. Some insect populations have plummeted so precipitously that they are at risk of going extinct entirely in England, Scotland and Wales.

Numerous other studies have painted similarly bleak pictures. In fact, experts have warned of an unfolding “insect apocalypse.” Bees and bumblebees have been among insects especially hard hit by manmade environmental stressors, including climate change and the widespread use of pesticides. The mass death of insects should be of grave environmental concern because the disappearance of creepy-crawlies will have knock-on effects for entire ecosystems: plants will lose their pollinators and various animals like birds will lose their main sources of food.

Now a new study, published in the journal Science, gives us some further insights into the state of insects worldwide. A international team of researchers, whose members work at two German institutions, set out to understand the severity of the problem by looking at insect abundance studies from around the world. They compiled data from 166 long-term surveys at 1,676 sites between 1925 and 2018 with the aim of understanding the trends in insect population changes over time.

“Both patterns were largely driven by strong trends in North America and some European regions. We found some associations with potential drivers (e.g., land-use drivers), and trends in protected areas tended to be weaker.”

Specifically, the researchers have detected a global decrease of 0.92% each year in land-based insect populations such as butterflies, grasshoppers and ants. That annual rate of decline adds up to around a total decline of 24% in just three decades and 50% fewer insects over 75 years. Among the main causes of the dramatic decline have been extensive agriculture, habitat loss and climate change.

This is the bad news. But there is some good news too.

Over the same period the number of insects living in freshwater, such as midges and mayflies, has increased at a similar rate, by 1.08% each year on average. This could be down to more effective water protection measures in many countries, the experts say. Population trends can also be highly variable, they explain, with areas less impacted by human activities showing more robust insect population health than more impacted areas nearby.

“For example, in countries where many insect surveys have taken place, such as Germany, the UK and the US, some places experienced declines while others quite close by indicated no changes, or even increases,” notes a statement about the findings. “Insect declines were strongest in some parts of the US (West and Midwest) and in Europe, particularly in Germany. For Europe in general, trends became on average more negative over time, with the strongest declines since 2005.”

People in many European countries have observed the declining rate of flying insects simply by finding fewer insects smashed up on the windshields of their cars while driving.

“Our analysis shows that flying insects have indeed decreased on average,” says Jonathan Chase, a professor of ecology at the German Centre for Integrative Biodiversity Research who was a coauthor of the study. “However, the majority of insects are less conspicuous and live out of sight — in the soil, in tree canopies or in the water.”

And many of these less conspicuous insects, like midgets and mayflies, continue to do relatively well. Their populations seem to have increased by 1.08% each year, which corresponds to an overall increase of 38% over 30 years. This positive trend has been especially noticeable in Northern Europe, Russia and the western part of the U.S.

“These numbers show that we can reverse these negative trends,” Chase says. “Over the past 50 years, several measures have been taken to clean up our polluted rivers and lakes in many places across the world. This may have allowed the recovery of many freshwater insect populations. It makes us hopeful that we can reverse the trend for populations that are currently declining.”

Insect abundance trends are complex phenomena, says Ann Swengel, a coauthor of the study who has been studying butterfly populations at hundreds of sites in Wisconsin and other U.S. states.

“We’ve seen so much decline, including on many protected sites. But we’ve also observed some sites where butterflies are continuing to do well,” Swengel says. “It takes lots of years and lots of data to understand both the failures and the successes, species by species and site by site. A lot is beyond the control of any one person, but the choices we each make in each individual site really do matter.”

The post Insects may not be doomed… if we leave them be appeared first on Sustainability Times.