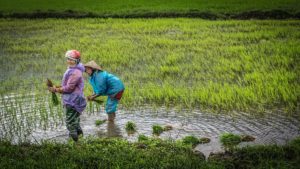 Around 3.5 billion people, or half of the planet’s population, depend on rice as a staple crop, especially in Asia. First cultivated some 9,000 years ago in China’s Yangtze Valley, rice would spread across East, Southeast and South Asia, and from there to the Middle East, Africa, Europe, and the Americas.

Along the way an ever-growing variety of cultivars emerged, better adopted to local environments.

In a new study, researchers from New York University’s Center for Genomics and Systems Biology have mapped the routes rice took over time across Asia by sequencing the genomes of more than 1,400 varieties of rice plants while also exploring geographical, archaeological, and historical climate data.

“For the first 4,000 years of its history, farming rice was largely confined to China, and japonica (a main variety of rice) was the subspecies grown,” they explain.

“Then, a global cooling event 4,200 years ago — also known as the 4.2k event, which is thought to have had widespread consequences, including the collapse of civilizations from Mesopotamia to China — coincided with japonica rice diversifying into temperate and tropical varieties,” the add. “The newly evolved temperate varieties spread in northern China, Korea and Japan, while the tropical varieties and spread to Southeast Asia.”

In other words, global cooling precipitated the emergence of new rice varieties and the crop’s relentless spread into both northern and southern Asia.

Now another global climate phenomenon, this time warming, is set to pose increasing challenges in the cultivation of rice, which is set to undermine food security for millions of people. Warming temperatures could positively impact rice production in some cooler areas, such as in northern China, but not so in already warm areas, much less hot and humid ones, further south.

“The cultivation of rice extends from drylands to wetlands and from the banks of the Amur River at 53° north latitude to central Argentina at 40° south latitude. Rice is also grown in cool climates at altitudes of over 2 600 m above sea level in the mountains of Nepal, as well as in the hot deserts of Egypt,” explains the Food and Agriculture Organization of the United Nations.

“However, most of the annual rice production comes from tropical climate areas,” the FAO adds. “In 2004, more than 75 percent of the global rice harvested area (about 114 million out of 153 million ha) came from the tropical region whose boundaries are formed by the Tropic of Cancer in the Northern Hemisphere and the Tropic of Capricorn in the Southern Hemisphere.”

In these tropical areas, rising temperatures are posing challenges by worsening droughts, which will entail yet more demand placed on already scarce freshwater sources. As a result, by mid-century rice yields could drop significantly in South Asia, Southeast Asia, East Asia and Sub-Saharan Africa. In lockstep with decreasing yields, the price of rice will increase, affecting poor people across Asia, Africa and elsewhere.

The current COVID-19 pandemic provides a foretaste of what is to come. Extensive lockdowns in many major rice-growing nations have seen rice production rates decrease and prices increase while there have been major disruptions in the international trade of rice with producing nations stockpiling rice rather than selling it.

“Panic buying prompted rice-exporting countries to impose limits or bans on exports, while domestic price caps imposed by some importing countries have led to reduced import volumes,” UN Environment notes. “Coupled with logistical stoppages resulting from nationwide lockdowns, over half of global rice supply – originating in five key countries – is now at risk. Currently, price surges disproportionately harm poorer households for whom rice is a staple, and where rice can account for almost half of monthly spending.”

Climate change may make a similar scenario a permanent feature of the future, warns Wyn Ellis, executive director of the Sustainable Rice Platform. “The adversities in the rice trade triggered by COVID-19 are an acute preview of what climate change has in store,” Ellis says.

“But instead of a temporary threat to farmers and food value chains, climate change impacts will be lasting, likely for generations,” the expert adds. “This pandemic shows us how devastating the consequences of inaction could be and how climate change can intensify existing crises.”

The post Covid-19 pandemic is a foretaste of what’s in store for rice appeared first on Sustainability Times.