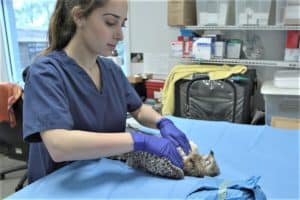 We’ve been seeing the troubling images for years: dead seagulls and other avian creatures with their guts bloated by large amounts of various plastic objects they unwittingly swallowed.

Plastic pollution has reached epic proportions worldwide and large numbers of birds ingest bits and pieces of plastic waste by mistaking them for fish and other edibles.

That we have known. But new research has now quantified the extent of the problem for a certain type of birds. Birds of prey swallow tiny bits of plastic debris at a rate of hundreds a day, particularly microplastic fragments made of polyester, polypropylene and nylon, according to scientists at the University of Central Florida in the United States.

The researchers examined scores of terrestrial and aquatic birds of prey, including hawks, ospreys and owls, that were retrieved from the Audubon Center for Birds of Prey in central Florida between January and May 2018. “Individuals were either dead prior to reaching the Center or died within 24 hours of arrival with no food consumed during captivity,” they explain in a study, published in the journal Environmental Pollution.

“Sixty-three individuals representing eight species were dissected to extract the gastrointestinal (GI) tract from the esophagus to the large intestine,” the scientists explain. “Microplastics were found in the GI tracts in all examined species and in all individual birds.”

That, needless to say, is worrying. Birds of prey are vital for ecosystems, controlling as they do the populations of other animals from rats to birds. Yet by ingesting large quantities of microplastics over time, they are at risk of having their digestive systems blocked, which will lead them to starve to death.

“Birds of prey are top predators in the ecosystem and by changing the population or health status of the top predator, it completely alters all of the animals, organisms and habitats below them on the food web,” stresses Julia Carlin, the study’s lead author who is a graduate of the university’s Department of Biology.

The findings of the study are in line with other research that has shown that predatory seabirds like albatrosses, shearwaters and petrels are at increased risk of ingesting bits and pieces of plastic debris while hunting for food.

Tube-nosed seabirds “are searching for a ‘needle in a haystack’ when they forage,” says Matthew Savoca, an expert at the University of California. “They may be searching for fish, squid, krill or other items, and it is possible that plastic debris visually resembles these prey.”

There could be another factor at play that causes these birds to mistake plastic waste for food. “It has been commonly assumed, but rarely tested, that seabirds eat plastic debris because it looks like the birds’ natural prey,” Savoca notes. In a study published in Science Advances in 2016, he and his colleagues proposed another explanation: namely that marine plastic debris produces an odor the birds associate with food, which tricks them into swallowing plastic.

The researchers compiled a database of all the studies that had to that point recorded plastic ingestion by tube-nosed seabirds over a half century, which amounted to some 20,000 birds from more than 70 species. They also built on another study that found that tube-nosed seabirds are naturally drawn to dimethyl sulfide (DMS), a sulfur compound derived from marine algae.

Their results, Savoca says, “showed that species of birds that use DMS as a foraging cue eat plastic nearly six times as frequently as species that are not attracted to the smell of DMS while foraging.”

According to the new University of Central Florida study the most common types of microplastic found in the dead birds of prey examined were microfibers, which accounted for 86% of all the plastics ingested.

“Microfibers can come from synthetic ropes or clothing and may end up in ecosystems through wastewater from clothes-washing machines,” a statement by the university explains. “Blue and clear microplastics were the most common colors identified, but the reasons for this could range from these being the dominant colors of the plastics in the landscape to birds confusing these colors with appropriate prey or nesting materials.”

Stopping the birds from ingesting plastic by mistake may well be an impossible task. What we can do, however, is to make sure much less plastic waste enters the environment. Doing so could involve removing plastic waste from landfills, making sure discarded plastic trash is carefully screened, and retrofitting water treatment plants and storm water drains to capture microplastics before they enter waterways and the oceans.

Shoppers can also do their part by buying natural fabrics instead of plastic-based ones, researchers say.