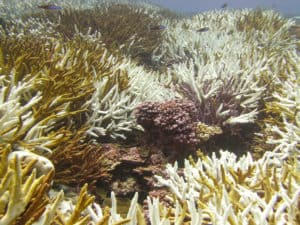 Despite the many challenges facing the world’s oceans today, coral reefs remain strongholds of marine biodiversity. Thousands of species of fish of all shapes and sizes call these colourful, complex and economically important ecosystems home. Impending ocean warming, however, spells trouble for these fishes.

Ever since the first global coral bleaching event devastated reefs in the late 1990s, scientists have worked to document the effects of these catastrophic phenomena on coral reef fishes. In the wake of severe bleaching, coral mortality often leads to changes in the community of fish that live on the reef: fish that feed on corals decline, while those that feed on algae increase as the latter proliferates.

But what happens to fish during a severe heat stress event — that is, when water temperatures rise, but the corals have not yet bleached and died? It seems that very few scientists have tried to find out.

Our new study, published in Ecological Applications, surveyed reef fish communities before, during and after the 2015–16 El Niño on Kiritimati, a coral atoll in the Pacific Ocean, that is part of the country of Kiribati. Our research suggests that short-term increases in water temperature may have devastating impacts on reef fish populations and the local communities that rely on them.

Heating up the world’s largest atoll

Kiritimati, or Christmas Island, is the world’s largest coral atoll — ring-shaped reef — by land mass. The nearest major airport is more than 2,000 kilometres away, in Hawaii. The people who live on Kiritimati are highly dependent on reef fish as a source of both food and income.

While the 2015–16 El Niño wreaked havoc on reefs worldwide, its effects were especially catastrophic around Kiritimati. Unprecedented levels of heat stress persisting for 10 straight months led to over 80 per cent coral mortality around the island, but not before triggering a change in the local fish community.

After just two months of heat stress, reef fish populations around the atoll had plummeted by half. The number of fish species also declined, with some species disappearing entirely. Five species, including the Chevron butterflyfish (Chaetodon trifascialis), which feeds exclusively on live coral, have not been seen since.

One year after the heatwave, however, we found — somewhat surprisingly — that total reef fish biomass and abundance had recovered, rebounding to levels similar to those we’d observed in years prior to the heatwave. This begs the question: What exactly happened during those long, heat-stricken months?

While severe heat stress can lead to decreased fitness and even mortality in reef fishes, we believe that most of the missing fish sought shelter on the deeper, cooler reefs around the island during the heatwave. Once the heat had subsided, they could have easily returned to the shallows.

Yet the recovery of the reef fish community was not the same across the board. Sites on the atoll nearest to the villages, where the reefs have been heavily affected by dredging, fishing and pollution, had impaired recovery relative to areas of the atoll far from villages where the reefs were nearly pristine prior to the heatwave.

This suggests that local environmental protection could help make reefs more resilient to the ravages of severe ocean warming. While it may not be enough to entice fish to stay put during a severe warming event, high-quality reefs may be more attractive to these fish upon their return.

A window into the future

If the reef fish return once the heat stress is over, is their disappearance in the short-term really a big deal? Considering that the survival of millions of people worldwide depends on tropical reef fishes, we believe the answer to this question is a resounding yes.

The impacts of climate change on coral reefs are only predicted to worsen in the coming decades. Studying the effects of severe heat stress in the present can serve as a window into the future, foreshadowing the consequences of gradual ocean warming and more frequent and severe marine heatwaves that are predicted to occur.

By understanding how fish populations react to elevated water temperatures, we can also attempt to predict and mitigate the effects of ocean warming on highly reef-dependent communities such as those on Kiritimati.

Within the realm of coral reef research, most studies on heat stress to date have focused on the link between heat stress and coral bleaching, and the knock-on effects of catastrophic bleaching on reef fishes. However, corals are not the only animals affected by the heat stress itself. Unless we intervene to limit climate change globally, we may risk losing not only corals but critically important reef fishes as well.