A safe and profitable nuclear plant is closing in France. Why? 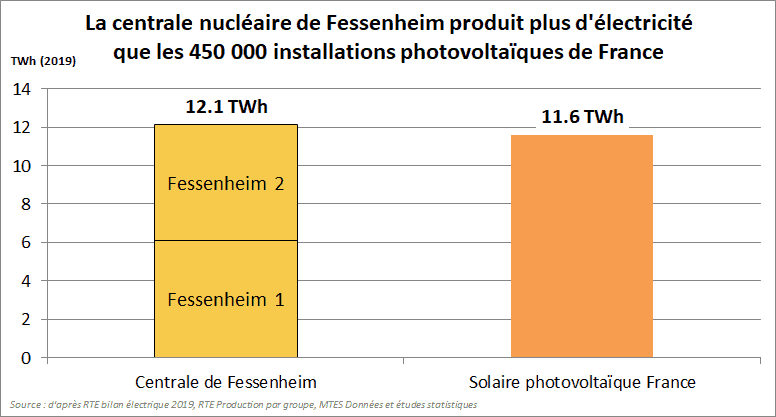 Assuming the reactor prevented France from adopting coal power like its neighbor Germany, Fessenheim 2 saved the same amount of carbon as taking almost 38 million cars off the road for the year.

If this feels like déjà-vu, it’s because Unit 1 faced the same fate only a few months ago. The combined loss of Unit 1 and 2 is staggering. Again, assuming the plants displaced coal, the two units saved the same amount of carbon as driving the 300 million kilometer round trip to the Sun … 5,000 times.

Put differently, in 2019 Fessenheim Unit 1 and 2 generated more electricity than all the solar panels in France combined. Shutting Fessenheim sets back France’s climate goal by perhaps a decade.

Why is this happening? Some news reports will tell you Fessenheim had to close because it was unsafe. Is this true?

Fessenheim had years left to run

The French nuclear regulator, ASN, says that “the plant rates above average on safety and environmental performance compared to the rest of the French nuclear fleet, and around average for radioprotection.”

Couple that with OECD research that suggests extending the life of plants like Fessenheim is the most cost-effective way to reduce carbon emissions, and the reasoning behind closing the plant looks even shakier.

The French government knows there is nothing wrong with Fessenheim, which is why it has agreed to pay compensation to the plant’s owners, EDF, every year until 2041; Fessenheim should have kept running for another 20 years. Unfortunately, there is no such compensation for the 5,000 people who will lose their jobs (directly and indirectly) when the plant closes.

A question of politics

The answer to why Fessenheim is closing is sadly one of politics. It goes back to 2012 when then President of France, Francois Hollande, made a deal to guarantee the support of the Greens (les Verts). Hollande promised France would reduce its reliance on nuclear to 50% instead of 75% of all electricity.

Why he proposed to do this when nuclear is low-carbon and we are in a climate crisis raises many questions in itself. But, crucially, as part of this deal he promised that Fessenheim, being the first commercial nuclear plants built in France, would close in the coming years.

Senior EDF executives have stated that the decision to close the plant was wholly political, and have sought to underline the great safety performance and professionalism of Fessenheim right up to its final days of operation.

Fessenheim’s death sentence has been lifted and reimposed several times, but current president Emmanuel Macron eventually confirmed both units would go by 2020. Socialist politician Ségolène Royal made closing Fessenheim a priority during her post as environment minister, squeezing the decree through in her final days in office.

This wasn’t the only time her “green” decisions seem to have done more harm than good for the planet and human health. She also opposed a Paris-wide ban on domestic wood-burning stoves, describing the proposal as “a ridiculous measure,” despite evidence showing it would save lives. The rising popularity of wood stoves has led to increased respiratory health issues in the French capital.

Bizarrely, Ségolène Royal suggested at one point that Fessenheim should be replaced with a Tesla factory.

The saddest part of this story is that there is no new renewable plant being built overnight to replace Fessenheim. It will be replaced almost entirely by fossil fuels. When questioned about the impact of Fessenheim’s closure on grid security, French grid operator RTE explained that the closure is not a problem as it’s being offset primarily by a “combined cycle gas plant in Landivisiau”.

“The Fessenheim power station emits 6g of CO2/kWh, while, on the other side of the Rhine, the German electricity system emits more than 400g of CO2/kWh,” Valérie Faudon of the French Nuclear Society explained.

“The output of the Fessenheim plant will not be replaced by renewable energy, which is already prioritised by the grid, but rather by the production of French or foreign gas-fired power plants. It’s worth noting that, as Fessenheim closes, Germany is commissioning a new coal-fired power plant, in Datteln,” Faudon added.

So a nuclear plant closes as a coal plant opens. Perhaps one day there will be a reckoning in the green movement, and it will be seen that nuclear is better than coal. That day is not today.

The post A safe and profitable nuclear plant is closing in France. Why? appeared first on Sustainability Times.