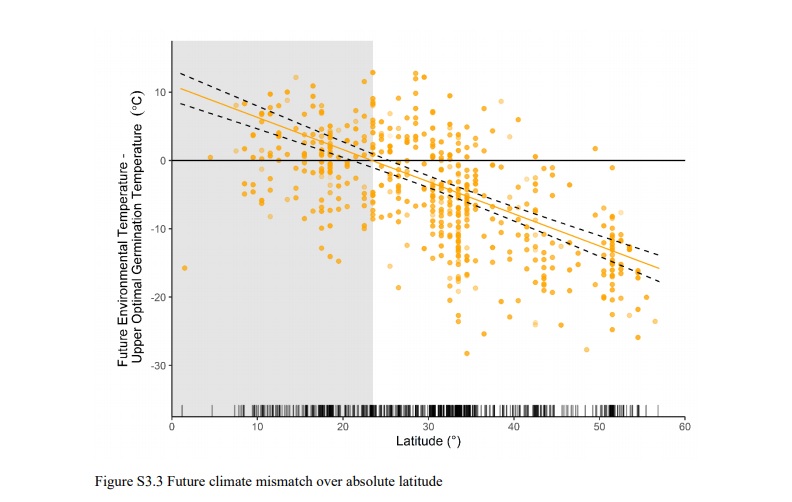 A comprehensive study of the world’s plant species has led researchers to a troubling conclusion: In the tropics, sometime in the next 50 years, it will likely become too hot for seeds to germinate.

That’s according to a team from University of New South Wales (UNSW) in Australia, led by Alexander T. Sentinella of the Evolution & Ecology Research Centre based in Sydney. Their work was published recently in the journal Global Ecology and Biogeography.

The researchers based their findings on an analysis of more than 1,300 species of plants – none of them agricultural – kept in a global seed germination database maintained by Kew Royal Botanic Gardens in the UK. Sentinella and his team reviewed nearly 10,000 records from Kew to better understand the impact of rising temperatures, looking at plant life on every continent except Antarctica.

“With seeds, you can experiment on them quickly, there are a lot of studies about them and importantly, germination directly relates to how a species will survive, because if the seed doesn’t germinate the plant won’t live,” says Sentinella. Along with evaluating the seeds, the research team generated temperature projections to the year 2070 to gauge the levels at which seeds will remain viable within that time window.

The Australian team discovered the tropical plants do not necessarily have narrower temperature tolerances for survival than species at other latitudes, as has long been thought in animals, but that their greater risk is from pushing up against the threshold of maximum seed germination temperatures.

The plants’ risk indeed increases the closer they are to the equator, but it’s the seed damage that concerns the scientists.

“These plants could be more at risk because they are near their upper limits. So, even a small increase in temperature from climate change could push them over the edge,” Sentinella warns. “The figures are quite shocking because by 2070, more than 20 percent of tropical plant species, we predict, will face temperatures above their upper limit, which means they won’t germinate and so can’t survive.”

More than half of tropical species are likely to experience temperatures outside their optimum germination windows. “If a seed’s germination rate is 100 percent at its optimum temperature, then it might only manage 50 or 60 percent, for example, if the temperature is higher than what’s ideal,” he adds.

Plant species appear more likely to germinate within the same temperature range regardless of latitude, so it’s possible that some plants may benefit if they can adapt to the warming climate. In fact, the UNSW team predicts that 95 percent of plant species found at a 45-degree latitude or higher will see shifts toward the optimal range for germination.

That said, Sentinella says it’s difficult to know which plants will survive.

“Some species won’t be able to adapt fast enough,” he said. “Sometimes plants can migrate by starting to grow further away from the equator or, up a mountain slope where it’s cooler. But if a species can’t do that it will become extinct.”

The post Rising heat in the tropics is a threat to plant seed viability appeared first on Sustainability Times.