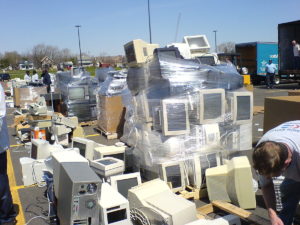 One of the lessons the current coronavirus pandemic has taught us is that we depend on electronic devices more than ever, not least during prolonged periods of self-isolation. Smartphones, laptops, television sets, e-readers, refrigerators, air-conditioners — they’ve all been supremely useful.

The trouble is what happens to them once they are replaced by newer models. The answer: millions of electronic devices end up in the trash heap each year, adding to the already acute problem of electronic waste. Last year alone a staggering 53.6 million metric tons of e-waste was generated globally, which was 21% more than just five years ago, according to a report by the United Nations.

Worse: the amount of discarded products with a battery or plug will reach 74 million tons by the end of the decade, which means that in just 16 years the rate of electronic waste will have doubled.

“This means that gold, silver, copper, platinum and other high-value, recoverable materials conservatively valued at $57 billion — a sum greater than the Gross Domestic Product of most countries — were mostly dumped or burned rather than being collected for treatment and reuse,” it adds.

Worse still: less than a fifth, or just 17.%, of e-waste was collected and recycled last year, leaving the rest unrecycled. Needless to say, that is a grave concern as e-waste is a particularly toxic form of waste, which poses a threat both to the environment and people’s health.

China led the way last year in electronic waste by producing just over 10 million metric tons, followed by the United States at nearly 7 million tons and India at third place with 3.2 million tons. These three nations accounted for nearly 38% of all the global e-waste last year.

When it came to continents, Asia accounted for a quarter of all e-waste generated globally, followed by the Americas with slightly over 13 million tons and Europe with 12 million tons.

“For perspective, last year’s e-waste weighed substantially more than all the adults in Europe, or as much as 350 cruise ships the size of the Queen Mary 2, enough to form a line 125km long,” the report notes.

Troublingly, even when electronic waste does get recycled, in countries such as Thailand, it is often done so in ways that pose as health and environmental hazards.

“What is most concerning is not only the quantity of e-waste that is arising, but also the fact that recycling technologies are not keeping pace with the growing amount of e-waste,” says Vanessa Forti, an expert at United Nations University who was a lead author of the report.

“That is the key message: the recycling needs to improve.”