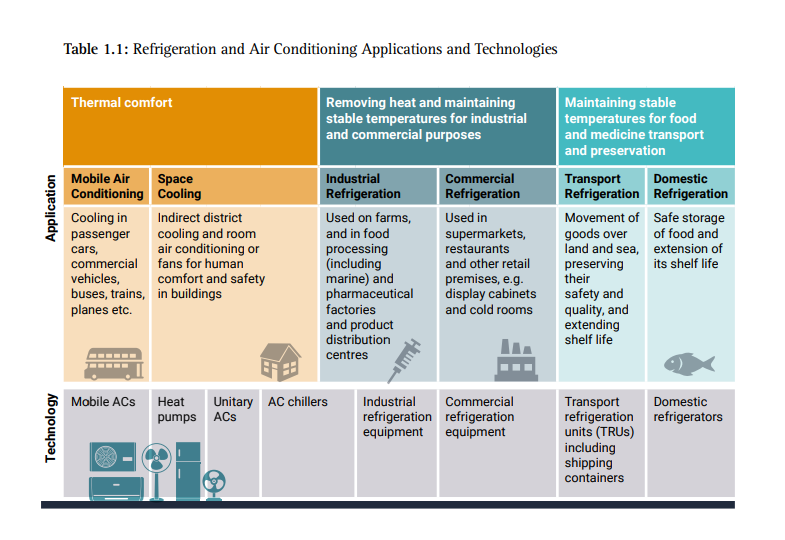 Earth is feeling the heat, and as temperatures rise so does the demand for cooling. Yet unless we get the related energy emissions and the use of hydrofluorocarbons (HFCs) under control, all that cooling will just continue a vicious cycle that makes the planet warmer.

“There are an estimated 3.6 billion cooling appliances in use globally today, and that number is growing by up to 10 devices every second,” says the United Nations Environment Program, in a new report issued in collaboration with the International Energy Agency (IEA).

That’s what it takes to keep buildings cool, to protect food and to keep medicines safe – the latter point underscored by the ongoing coronavirus pandemic and hopes for a vaccine, the IEA notes. Yet a 2018 University of Birmingham study estimates that 14 billion cooling appliances would be in use by 2050 if everyone on the planet who needed them (not just those who can afford them) had access in a warming world, and that means getting intentional and innovative about cooling technologies.

The demand threatens the ability of nations and their governments to meet their climate targets, and the “Cooling Emissions and Policy Synthesis Report” urges a two-pronged approach to controlling the problem. First, up to 460 billion tons of carbon dioxide (CO2) equivalent emissions can be reduced by improving the energy efficiency of air conditioning systems, refrigerators and other devices, as well as the energy systems that power them.

Second, that reduction also depends on aggressively reducing the use of HFCs in keeping with the 2016 Kigali Amendment to the Montreal Protocol, which was established decades ago to control damage to the ozone layer from earlier generations of such refrigerants.

“While HFCs do not affect the ozone layer, they are potent greenhouse gases and phasing them down has the potential to avoid up to 0.5°C of warming by the end of the century,” the report authors said.

“The initial phasedown schedule of the Kigali Amendment ensures about 90 percent of this will be captured.”

The benefits of achieving those climate targets are economic too. The IEA estimates nearly US$3 trillion in savings by 2050, just from doubling the energy efficiency of air conditioners through reduced power generation and delivery costs. At the same time, the electrical power needed would decrease by some 1,300 gigawatts, slashing an amount equal to all of the 2018 coal-fired power generation capacity in China and India combined.

As is the case with all climate action, the authors warn that time is of the essence but the current global challenges offer a window of opportunity to innovate, to develop national plans and to act cooperatively in the international effort to curb the climate impacts of cooling.

“As governments roll out massive economic stimulus packages to deal with the economic and social impacts of the COVID-19 crisis, they have a unique opportunity to accelerate progress in efficient, climate-friendly cooling,” says Dr Fatih Birol, the IEA executive director.

“Higher efficiency standards are one of the most effective tools governments have to meet energy and environmental objectives. By improving cooling efficiency, they can reduce the need for new power plants, cut emissions and save consumers money.”