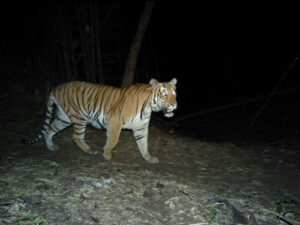 A century ago tigers were kings of the jungle across much of Southeast Asia. Literally so. The striped predators ruled supreme at the top of food chains in thick forests from Laos to Malaysia and from Burma to Vietnam.

No longer. Most of those forests have been felled or thinned and throughout their ranges in the region tigers are now down to their last few hundred individuals, clinging on for dear life with tooth and claw in the wild in the face of deforestation and poaching.

The Balinese and Javan subspecies of the stately animals have been extinct for decades and their Indochinese cousins have recently been declared extinct in Laos and Cambodia. Populations of Indochinese tigers still survive in Myanmar (formerly Burma), Vietnam and Thailand, but even there their situation is precarious.

And so it is a welcome development that working together Thailand’s Department of National Parks, Wildlife and Plant Conservation (DNP), the international conservationist group Panthera and the Zoological Society of London have managed to capture high-quality footage and photos of several wild tigers in Thailand for the first time in four years.

The high-definition videos and photos were captured with remote camera traps as part of a wildlife-monitoring program in a protected forest in western Thailand, which is home to the largest remaining population of Indochinese tigers in the country with a fighting chance for long-term survival.

“These sightings are extremely encouraging for the future of tigers in our country and beyond,” stresses Saksit Simcharoen, head of the Wildlife Research Division for DNP.

“[We] are keenly monitoring the region to determine if these individuals establish territories, ultimately helping to achieve Thailand’s goal of increasing tiger populations by 50% by 2022,” he adds.

Yet in order for local tigers to rebound, Saksit  emphasized, Thailand’s wild tigers will need to be kept under close watch by conservationists and local rangers to ensure they remain well protected. “Sustained and stronger protection of this area from poaching activity of any kind is the key to ensuring these individuals live on, helping Thailand’s tigers to rebound,” he says.

Only 220 or so wild tigers remain in Myanmar and Thailand, two neighboring countries with interlinked forests, but their population densities tend to be too low in certain areas for more reliable estimates to be made, conservationists say.

That is why the latest sightings of several tigers are so heartening in Thailand’s Huai Kha Khaeng Wildlife sanctuary in the country’s western forest complex. The number of local tigers has increased from 46 to 71 in recent years, according to Thai experts. Another 10 to 18 tigers remain in another local Thai forest complex and 10 more in a forest in a central part of the country.

“In a sea of news casting doubt on the future of our planet’s wildlife, this development is a welcome sign of hope and potential turning of the tide for the endangered tiger in Thailand,” stresses John Goodrich, a scientist who is director of Panthera’s Tiger Program.

“These tigers’ repeated detections in new areas suggests suitable habitat and prey exists for this small but significant population,” Goodrich adds. “[O]ur collaborative conservation efforts are paying off at a time when the species needs it the most.”