It is Time for a Democratic Global Revolution 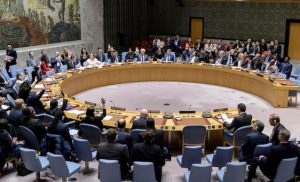 The UN’s Security Council, in particular, is suffering from a dysfunctional decision-making method that grants the five victors of the Second World War and official nuclear powers not only a permanent seat but also a veto right. Credit: United Nations

The people of the world need to seize the moment and bring about a democratic global revolution. It is time for a global parliament and real representation.

More than 21 million people got infected with the novel coronavirus and over 770,000 have died. Never before did the world witness similar collective lockdowns of social and economic activity that had to be enforced to contain the pandemic.

For many, the corona-related global crisis exacerbates a situation that was already critical before the outbreak of the virus.

The climate crisis is unfolding with record temperatures in Siberia, Greenland, the Antarctic and other places like the Middle East. The new climate apartheid is characterized by whether you can afford to shield yourself from such heat or not. Most cannot.

135 million people are facing crisis levels of hunger. There are currently more than 70 million displaced people who have fled war, persecution and conflict. It’s the worst humanitarian and refugee crisis in seventy years.

There is a global inequality crisis. Productivity gains and globalization disproportionately benefit the affluent. Financial assets in the trillions are hidden in offshore accounts from tax authorities. The world’s 26 richest billionaires own as much as the poorest 3.8 billion people on the planet.

While global surveys confirm that people across all world regions strongly believe in democracy, there is in fact a democratic retreat. Confidence in the actual performance of democratic governments is waning. Populist nationalism and authoritarianism has been advancing, aided and abetted by social media platforms and the internet. Major arms control treaties are crumbling, geopolitical tensions are rising and multilateralism is under attack.

Civil society and citizens across the world are fighting back, though. Pro-democracy movements are at an all-time high as widespread protests in dozens of countries now and in recent times demonstrate. Freedom and justice have lost no appeal. At the same time, millions of citizens joined climate protests around the world and called for quick and effective action in this critical field.

The present issues are symptoms of a crisis of global governance. There is a scale mismatch between a political world order that is based on 200 states and territories and issues that demand decisive global action.

As the UN celebrates its 75th anniversary this year, the organization continues to lose significance and impact. The UN is only as strong and effective as its member states allow it to be. The same applies to all intergovernmental organizations and forums, including the World Health Organization that had to launch an investigation into its handling of the Covid-19 pandemic.

The UN’s Security Council, in particular, is suffering from a dysfunctional decision-making method that grants the five victors of the Second World War and official nuclear powers not only a permanent seat but also a veto right.

If long-lasting solutions are to be achieved, this scale mismatch must be tackled. It is not enough to call on individual governments to change their policies. The way how the world is governed must be changed. What is needed is a new vision of a democratic world order that is based on shared sovereignty on global issues, a clear commitment to human rights, the principle of subsidiarity and complete disarmament.

When the UN was founded it was recognized that this should only be a beginning and that changes would be required. Article 109 of the Charter provides that a conference to review the Charter should be held by 1955. The UN’s member states did not deliver on that promise. Now is the time to hold them to account.

The world’s people need an actual say in global affairs that is not intermediated by national governments and their diplomats. The key ingredient of a new UN should be a democratically elected world parliament that complements intergovernmental bodies such as the UN General Assembly.

The creation of a new democratic world organization that has actual powers seems to be a gigantic project that raises numerous questions. How is a global democracy to be created while major states themselves are not democratically organised? Can decisions of a world parliament be enforced against the will of individual states? How is it possible that states will agree to the creation of a superior political unit?

These questions show the way forward: The people of the world themselves need to embrace and call for global democracy. Eventually, they are the sovereigns not only in their individual states but on the planet as a whole, too.

A global democratic revolution needs to push for a legitimate, inclusive and representative global body that will deal with these questions in a serious way. The creation of a UN Parliamentary Assembly could be an important stepping stone to launch a global constitutional process and a transformation of global governance.

This global democratic revolution will be peaceful because it is not about destroying structures or conquering territories, but about opening up a political level that is lying idle. Supranational integration cannot be imposed by force. It will happen because the people want it.

If existing movements in the fields of climate, environment, peace, disarmament, democracy, social justice and others join forces, the global democratic revolution will become very real.

This may sound visionary. But the big issues troubling this planet and its people will remain, and worsen, unless the root cause is addressed. A democratic global government is not a mind game in some ivory tower. It is the most important question on the agenda of humanity today.

The post It is Time for a Democratic Global Revolution appeared first on Inter Press Service.

The post It is Time for a Democratic Global Revolution appeared first on Inter Press Service.