US President Donald Trump and his ‘war council’ – led by Secretary of State Mike Pompeo – have amplified their aggression against China. What began as a trade dispute in the 1990s has now escalated into the United States making an existential challenge against China.

The threat against China is made not for irrational reasons, but for perfectly rational ones, which are laid out below in our Red Alert no. 9 (also available as a separate download from our website). These have to do with the emergence of China as a major economic and technological power. What most rankles the US ruling class is that the various hybrid war techniques to weaken or overthrow the government are simply not available. The only means at the disposal of the United States to hold on to its power – chillingly – is armed force. 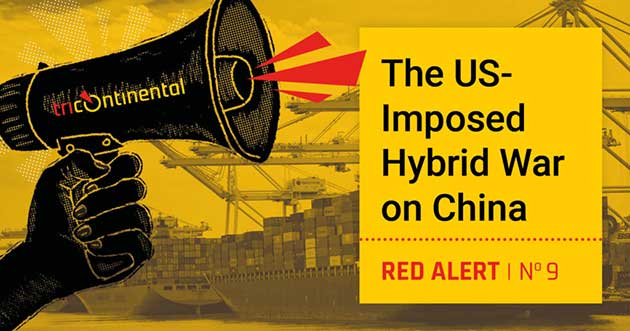 Red Alert no. 9. The US-Imposed Hybrid War on China

Is the United States trying to impose a war on China?

The US has now begun a war against the Chinese economy. The attempt to isolate Huawei and ZTE from their suppliers and their markets will have a debilitating impact on the growth potential of the Chinese economy. The US has sanctioned roughly 152 companies that make chips and other products for Huawei and ZTE. Increased bans – through the US government’s Clean Network initiative – would prevent US companies from using Chinese cloud services and undersea cables, and it would ban Chinese apps from appearing on app stores. The US government has increased pressure on other countries to join in this campaign.

The US government has increased its military pressure along the eastern rim of China. This includes the 2017 revival of the Quad (Australia, India, Japan, and the US), the creation of the US’ Indo-Pacific Strategy (its key document from 2020 is called ‘Regain the Advantage’), and the development of a range of new weaponry, including cyberweapons. This military power has come alongside hostile rhetoric against China, with attention focused on Hong Kong, Xinjiang, and Taiwan, and the depiction of the coronavirus pandemic as a ‘China virus’. Evidence is not as important here as the use of older racist and anti-Communist ideas to demonise China. 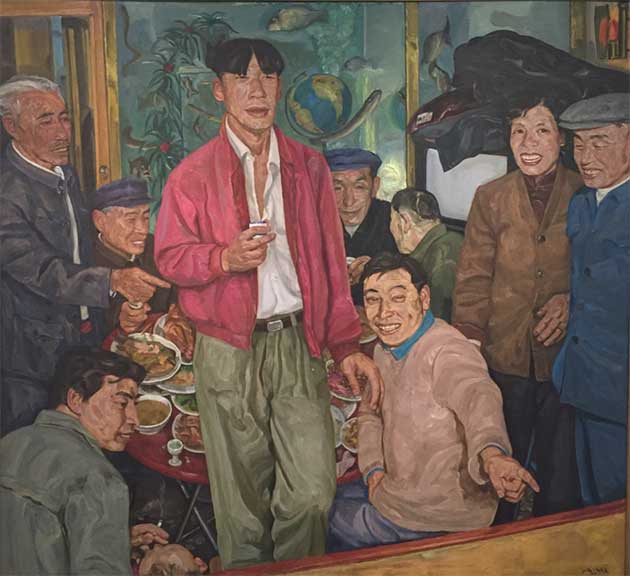 Why is the US increasing its pressure against China?

China’s technological advances could result in a generational advantage over the West. China’s scientific and technological developments came because of the country’s investment in higher education and in its ability to transfer technology from firms that entered the country to manufacture goods. In 2018, Chinese scholars for the first time published more scientific articles than their colleagues in the US, and Chinese firms filed more patent applications than US firms. Chinese tech firms have now produced products that appear to be ahead of US, European, and Japanese products. Examples for this include 5G, BeiDou (a better mapping technology than GPS), high-speed trains, and robots.

Faced with US pressure, China has crafted an independent trade and development agenda. Since the world financial crisis, China began diversifying its economy from reliance upon the US and European markets to build up its own internal market and to increase engagement with the Global South. The immediate projects that developed included the Belt and Road Initiative, the String of Pearls Initiative, the Forum on China-Africa Cooperation, the Shanghai Cooperation Organisation, and the China-Community of Latin American and Caribbean States Forum. The Chinese government has also begun to pay more attention to the Association of South-East Asian Nations (ASEAN). These moves come alongside a remarkable poverty eradication programme.

Currently, China is highly dependent on imported energy – such as gas from ASEAN nations, Australia, and Qatar. The China-Russia 6000kms ‘Power of Siberia’ pipeline will bring 38 billion cubic metres of natural gas, a substantial increase to meet the demands for the 90 billion cubic meters consumed by China. In 2014, Russia’s multinational energy corporation Gazprom and the China National Petroleum Corporation signed a $400 billion for a thirty-year deal.

Increasingly, China has attempted to build institutions outside of Western-controlled trade and development architecture, including the Asian Infrastructure Investment Bank (founded in 2014). As part of this, China has committed to de-dollarisation; China has proposed to hold its reserves and to conduct trade in currencies other than the US dollar. This is a long-term but inevitable development, and one that threatens the overall role of the Wall Street-Dollar complex. China’s cooperation with Russia is most advanced in this arena, with about 50% of Russia-China trade conducted in roubles and yuan (Russia owns about 25% of the global yuan reserves). Both Russia and China are divesting themselves of their dollar reserves. In January 2020, Russia sold $101 billion, or 50%, of its dollar reserves and moved $44 billion into Euros and $44 billion into yuan. The yuan, however, represents only 2% of global currency reserves.

Against the eastward expansion of NATO and the emergence of the Quad, China and Russia have crafted a military and diplomatic Eurasian security bloc. This is evident in the arms deals and the military exercises, but also in diplomatic coordination. For example, Russian and Chinese foreign ministry spokespersons Maria Zakharova and Hua

Chunying said in late July that they would join efforts in combatting the information war against China and Russia. Chinese diplomats have taken a more forthright attitude in their statements; they have been dubbed the ‘wolf warrior diplomats’, an allusion to a popular film where a Chinese soldier from an elite Wolf Warrior troop defeats a group of terrorists led by an ex-US Navy Seal. 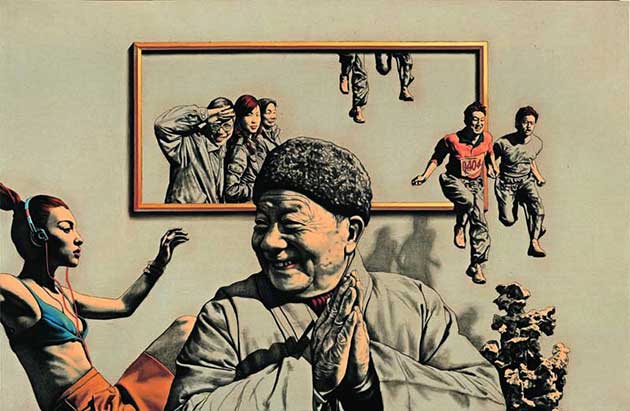 What contradictions does the US war project face?

Chinese economic developments – such as the country’s capacity to outspend the US in development aid to outbid Western firms in trade deals – has produced alliances between China and key capitalist sectors in countries that have otherwise been secure US allies. Examples of this are amongst sections of the capitalist class in the Philippines and Sri Lanka, where Chinese investment has been welcomed.

The Chinese state has intensified its intervention in the tech sector inside China, with a $14 billion private and public fund to support tech developments. Semiconductor Manufacturing International Corporation (SMIC) – China’s top chip company – had an initial public offering (IPO) in Shanghai which netted $7. 5 billion. As a consequence of such funds and its own scientific developments, China will soon be able to bypass the US chip firms.

China’s economic capacity continues to exert pressure on fragments of capital in different countries. For instance, Australian mining companies rely upon China to buy iron ore from Australia. These companies lobby Canberra not to take too hostile a position against China. Roughly one third of Australia’s total exports go to China; these include soy, barley, meat, fruits, gas, and the raw minerals. The Australian government is forced to acknowledge these concerns, even though it has a longer-term perspective than the short-term profit concerns of the mining conglomerates. China has already hedged its bets, increasing purchases of soy and meat from Argentina and Brazil, and it will likely buy more mined goods from Brazil (Brazil’s Vale is using massive ships to carry mined goods to China).

The US military is stretched thin between the conflicts in Venezuela and Iran, and now in China. The US Navy has had four secretaries in a year, part of the chaos in the Trump administration. As a consequence, the US Navy has complained about the lack of ability to handle so many theatres of war at the same time. China has developed sophisticated defence mechanisms, such as cyber warfare techniques that have the ability to shut down US communications, starting with their satellites, and such as their Dongfeng missiles, which are capable of hitting the US navy ships that are in the South China Sea. 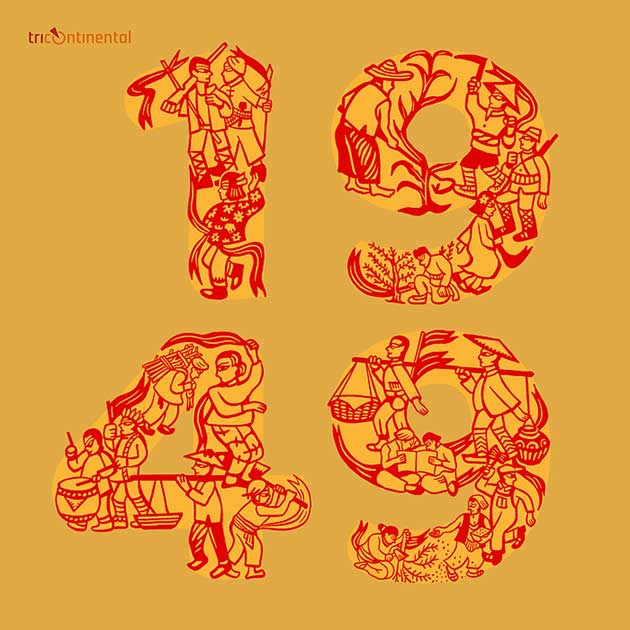 The eighth century Chinese poet Li Bai wrote of the ugliness of war; as far as war is concerned, nothing has changed over the centuries.

Soldiers smear their blood on the dry grass

While generals map the next campaign.

Is no better than losing one.

The post Wise People Know That Winning a War Is No Better Than Losing One appeared first on Inter Press Service.

Dedicated to Soni Prashad, 1929-2020, who spent her life looking for a better world.

The post Wise People Know That Winning a War Is No Better Than Losing One appeared first on Inter Press Service.