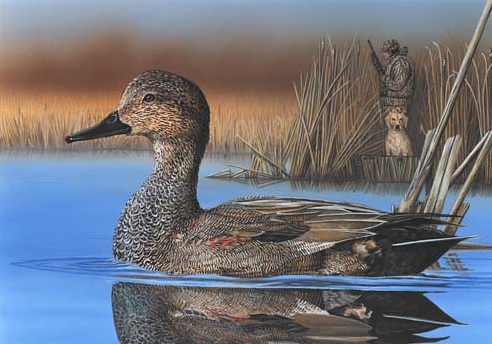 The United States Fish and Wildlife Service (FWS) is rightly proud of its wildlife conservation role, but a beloved annual art competition for its longstanding Federal Duck Stamp program has some nature lovers “crying fowl.”

That’s because the current U.S. administration made a rule change that requires visual elements of hunting to be integrated into the wildlife paintings used for the stamp design. In seeking to meet the requirement, some artists are including spent shotgun shell casings and lost duck whistles that critics say are essentially celebrations of trash.

This year’s winning entry from artist Richard Clifton, above, features duck calls visible among the reeds at lower left. It’s a bold and lovely image, but at least 24 of the 138 wildlife paintings submitted for this year’s contest featured either a duck call or shotgun shells in the water or left strewn along its edge, according to a tally from the Audubon Society.

Other images show hunters with guns, boats and dogs, which some conservationists say is a broader messaging concern because many of the stamps are sold to birding enthusiasts, nature photographers and others who aren’t among the roughly 4 percent of Americans who actually hunt.

To be clear, the hunting itself isn’t really the problem. The Federal Duck Stamp program was launched in 1934 as a way to generate revenue for conservation (currently about $40 million each year) and the U.S. has long viewed hunting itself as key to conservation. Stamp sales across the decades have raised more than $1 billion for conservation efforts, in part to buy wildlife refuge land and protect more than six million acres of habitat, the FWS says.

“The official name of the Duck Stamp says it all – the Federal Migratory Bird Hunting and Conservation Stamp,” the FWS explains. “Among the birds directly benefiting from Duck Stamp revenues are water birds such as the least bittern and black tern; shorebirds such as the black-necked stilt and American avocet; raptors such as the Swainson’s hawk and golden eagle; and wetland-associated songbirds such as the vermilion flycatcher and tricolored blackbird.”

The stamps allow free access to any U.S. wildlife refuge, with some 46 million visitors each year. The FWS says more than 80 percent of visitors are there for wildlife watching, specifically birds, and not for the hunting that requires the stamp. But the new art competition rules return the focus to hunting – the wrong direction, opponents say – and force the painters to include what contest artists Rebekah Knight and Jim Hautman call litter.

“That looks to me like litter, and a lot of people said the same thing,” Knight told Audubon editor Andy McGlashen. “It’s just not good for trying to get the correct message across for people who don’t know anything about hunting.” It’s also a questionable rule to those who do know something about the environmental challenges that pollution presents for wildlife and wetlands.

Want to decide for yourself? A photo gallery of all the contest painting images and their “hunting debris” is available from FWS here.