Less money spent this Halloween could help the environment 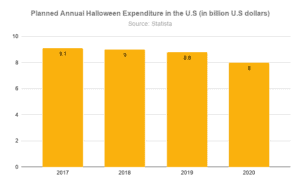 Because of the ongoing Covid-19 pandemic, the expenditure for Halloween in 2020 will likely decrease by 10% in the United States since people are expected not to spend as much as usual this year with rising unemployment rates and lowered incomes for many people.

This will have an impact on the economy since Halloween is one of the holidays with the highest rate of expenditure. On the other hand, the environment might benefit in some ways. Sales of candies and chocolate are expected to remain fairly robust this year as many people find that their Halloween is incomplete without them, yet overall expenditure on them will still be less than in previous years.

The year 2010 saw sales worth $5.8 billion as the total Halloween expenditure. That was an already high figure, but the following year saw an increase by 10% to $6.86 billion.

A similar trend would be observable in subsequent years. Yet for the first time in four years this upcoming Halloween’s annual expenditure is expected to drop by 10% from $8.8 billion last year, mainly because of the ongoing pandemic. With that 10% drop, lots of businesses will be negatively affected.

Not surprisingly, many people are less interested in this year’s Halloween as they and their families are struggling to maintain a sense of normalcy. This Halloween will be far different from the usual across the United States since only about one in three adults will allow their children to go trick-or-treating, according to a poll. That said, many people will still celebrate Halloween in their own ways such as by decorating their homes, carving pumpkins and wearing costumes at home.

Now for some good news perhaps

With people spending less at Halloween this year, there will likely be less demand for cocoa-based products, which could have a positive environmental impact. Cocoa products alone contribute around $2.6 billion to the overall Halloween expenditure each year. Cocoa has a vital role in the economy of many nations and is especially important for Halloween thanks to the prevalence of cocoa-based gifts.

With a lot of chocolates being sold to consumers all over the United States, cocoa is a major part of the holiday. However, several environmental groups have been focusing their attention on the climate impacts of agriculture, including cocoa production, especially in the form of large-scale deforestation and other harmful activities such as pesticide use.

A group of researchers recently took a closer look at the common types of chocolates that are regularly bought by consumers. They then evaluated the effects of these on the environment and found that it requires 10,000 liters of water to produce a kilogram of chocolate, which means that freshwater sources are exploited in some areas even as deforestation to make way for cocoa plantations drives climate change.

Leading companies, including Nestle and Mondelez, have promised to regulate their supply chains and ensure that sustainably grown cocoa is used in their products. In coming years, once the pandemic is finally over, producing cocoa more sustainably will help ensure that the environment will be impacted less even as Halloween expenditure rebounds.

The post Less money spent this Halloween could help the environment appeared first on Sustainability Times.