Indigenous people in Borneo seek to save their forests 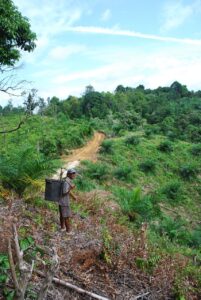 Indigenous people on the island of Borneo are up in arms over continued deforestation, which has left their once lush environment a mere shadow of its former self.

Intensive forest clearing has caused an ecological disaster in the Malaysian state of Sarawak where both numerous critically endangered species and indigenous ways of life are at risk of disappearing for good unless all large-scale deforestation ceases in already badly fragmented and much-thinned forests.

“[Further] logging will destroy our forests,” Komeok Joe, a leader of an indigenous semi-nomadic ethnic group known as the Penan, has warned in an interview with Al Jazeera.

“It will destroy our rivers and medicines and prevent us from satisfying all of our needs in the forests on which we depend for our lives,” the ethnic minority activist said.

“We Penan communities reject any logging activities in our Baram territory,” he added, referring to an area of the Baram River, which is a major source of nourishment for animals, plants and people.

Over the past years and decades vast swathes of virgin forest have been cleared for timber and agricultural use on Borneo, the world’s third largest island whose jungles are among the most biodiverse areas on earth. These old-growth forests are home to such unique species as orangutans, sun bears and hornbills, all of which are critically endangered.

“A century ago, most of Borneo was covered in forest. But the region has lost over half of its forests, and a third of these have disappeared in just the last three decades,” the World Wide Fund for Nature (WWF) explains.

“Only half of Borneo’s forest cover remains today, down from 75 per cent in the mid-1980s. With a current deforestation rate of 1.3 million hectares per year, only peat and montane forests would survive in the coming years,” the WWF warns.

However, the wanton exploitation of precious natural resources continues apace in areas of Borneo inhabited by indigenous peoples whose subsistence livelihoods and traditional lifestyles are both in danger of disappearing along with their old forests.

Agricultural conglomerates continue to clear forested land for new palm oil plantations in what many ecologists have described as an ecological catastrophe on the island, which is shared by Malaysia, Indonesia and Brunei. Logging, too, has been taking its toll on Borneo’s once lush forests.

Indigenous people have lived in the island’s forests for countless generations and often live in seemingly idyllic surroundings.

“The terrain of the Baram region is carved out with limestone cliffs, leafy trails, dipterocarp roots and mossy streams,” observes Fiona McAlpine, project manager for The Borneo Project, a nonprofit that supports community-led efforts to defend forests and maintain sustainable livelihoods for locals.

“Snaking its way through the middle is the mighty Baram River — life source for dozens of villages, around 20,000 Indigenous people and a multitude of endemic animal species,” she adds.

Yet indigenous people are rarely consulted by companies that intrude into their ancestral lands and lay waste to the forests that these ethnic minority people call home. So many of them are doing their best to fight back by raising their voices and campaigning.

“Enough is enough,” Danny Lawai Kajan, a villager living in an area of Sarawak where logging has been rampant. “We want the trees to grow back,” he told Al Jazeera.

“We do not want any more destruction to our forest. No more logging,” another villager stressed.

Local and foreign rights activists have been taking up the cause of indigenous people in Sarawak and elsewhere in Borneo. They have been raising awareness of continued deforestation in various areas and engaging in protests against any further logging.

“Indigenous communities in Sarawak are on the front lines of the climate crisis and they need our support,” McAlpine says.

Even as the future of indigenous communities along stretches of the Baram River and elsewhere remains in doubt, so does the future of myriad endangered species. Massive deforestation and illegal wildlife trafficking have led to a biodiversity crisis from which Borneo’s forests may never recover unless drastic action is taken to protect remaining woods and all their residents.

“Without the maintenance of very large blocks of interconnected forest, there is a clear risk that hundreds of species could become extinct,” WWF notes.

“Large mammals such as orangutans and elephants are particularly affected because of the vast areas they require to survive. For example, the Borneo pygmy elephant has increasingly come into conflict with the expansion of human agriculture activities in its natural habitat,” the environmental group says.

“Other smaller species, especially small mammals, may not be able to re-colonize isolated patches of suitable habitat and thus will become locally extinct,” WWF elucidates. “Road construction through protected areas leads to further separation of habitat ranges and provides easy access for poachers to some of the more remote and diverse tracts of remaining virgin forest.”

The post Indigenous people in Borneo seek to save their forests appeared first on Sustainability Times.