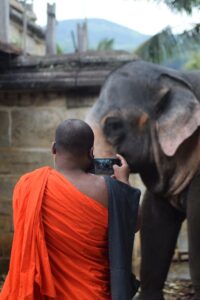 Elephants feature prominently in religious and national iconography in predominantly Buddhist Thailand, whose national religion credits the jumbos with embodying the supreme qualities of the Buddha himself. Yet their status as sacred creatures has not stopped some wild elephants from killing three Buddhist monks in three separate incidents in just a few weeks.

Not surprisingly, the killing of the monks by wild elephants has shocked many of the faithful. “Elephants injure and kill people sometimes, I know, but I assumed they would leave monks unharmed because of their holy power,” said Sudarat Saetang, a local Buddhist.

In one incident last week Phra Sombun Bunwat, a senior 64-year-old monk, was found dead with severe head, arm and other injuries in a grassy area at a rural village beside the Thong Pha Phum National Park in the central Thai province of Kanchanaburi. A subsequent investigation revealed that the monk had been stomped to death by a wild elephant while he was on his morning alms round outside his monastery. The pachyderm likely encountered the man and charged at him in anger or self-defense.

A few days later another monk, a 21-year-old novice, was likewise found dead with severe injuries, this time on a mountain in a rural area in the northern province of Kamphaeng Phet. It is believed that the young monk was practicing meditation when he was attacked and killed by a wild bull elephant, which may have been in musth and so more aggressive.

A villager discovered the monk’s body when he went looking for the Buddhist clergyman because he had failed to show up for his daily alms round in the community. “He did not show up this morning, so I walked up the mountain,” village headman Kraiwan Nontibut told a Thai-language newspaper. “I was shocked to find him dead.”

Meanwhile, in late October a 52-year-old monk was trampled and gored to death by a wild elephant near his monastery in the seaside province of Chonburi in eastern Thailand. He, too, was on his morning alms round when he was set upon by a pachyderm as the monk was walking through a grassy area peppered with clumps of vegetation.

A Cambodian woman who worked in the area as a farmhand said she had tried to warn the monk of the presence of foraging elephants by shouting out to him, but he did not seem to hear her or heed her warning. Before the attack a herd of around 30 elephants had descended from the hills to the village in search of food in orchards and plantations, causing concerns among locals.

Although attacks by pachyderms on people are rare in Thailand, they do occur periodically. Over the past century the number of elephants in the country has plummeted from around 100,000 to a few thousand, and even the remaining pachyderms have fallen on hard times in their natural habitats.

As once lush local forests have been cut down or become increasingly fragmented, wild elephants lack adequate roaming space and food. They frequently venture into populated areas to forage for food. As a result, elephant-human conflicts have been on the increase, according to experts.

“Conflicts have now been detected in 41 sites where wild elephants are present, up from just 20 back in 2003,” Pichet Noonto, an elephant specialist, warned in 2018.

Between 2012 and 2018 as many as 45 people are known to have been killed by elephants while 30 others were injured. Villagers living near the forests of wildlife sanctuaries and national parks inhabited by the country’s last 3,500 or so wild elephants are especially at risk of being attacked by foraging pachyderms.

Conflicts between elephants and people have carried on ever since in some areas of Thailand. In July last year, for instance, a farmer and his wife were attacked by one of three wild elephants that were foraging at a cassava plantation in the northeastern province of Buri Ram. The man died of chest wounds while his wife escaped with minor injuries as she played dead before seeking refuge under a nearby truck.

Elephants, too, can be at the receiving end of violence. During the same six-year period between 2012 and 2018 at least two dozen wild elephants, which are critically endangered in Thailand, were killed by villagers seeking to keep the pachyderms away from their crops.

“Electrified fences are the single largest cause of elephant deaths, accounting for 72 percent of the fatalities,” a Thai newspaper explained. Traps and poison can also take their toll on foraging jumbos, while some perish in accidents as they try to cross roads from one patch of forest to another.

Encouragingly, more and more farmers are resorting to far safer methods of deterrence against jumbos, such as placing beehives around their plots. Elephant skin is too thick for bees’ stings, but the pachyderms have sensitive areas such as the tip of their trunk, mouth and eyes. A swarm of bees can cause them real pain and the elephants know this.

“Elephants, revered and loved for ages in Thailand, have lately become a problem. Human settlements are expanding into elephant habitat, leaving wild populations of the species no other option but to invade human territory,” explains the International Union for Conservation of Nature (IUCN).