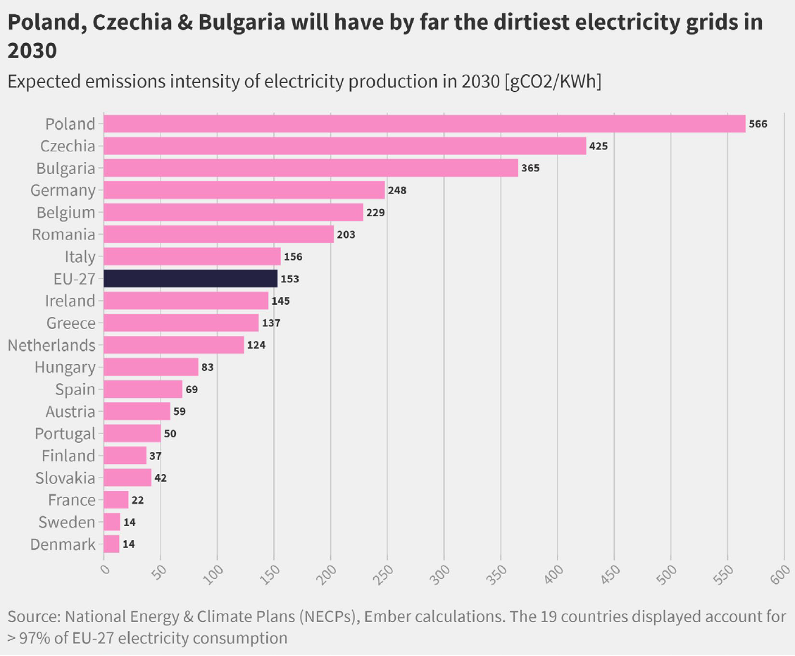 The “Energiewende” of Germany has been going on and doing rather badly for two decades now. They wanted to decrease emissions but started the project by deciding to close most of their low carbon energy production, namely their fleet of nuclear power stations. While doing that, Germany has also put hundreds of billions of euros into adding solar, bio and wind energy to its mix. Even with this massive support, their energy emissions have decreased slower than Europe on average.

Now Belgium seems convinced it can do even worse. According to a fresh report, Belgium will increase the emissions from its electricity production by almost half in the coming decade and end up paying a hefty sum for the privilege. What on earth is happening in there?

As of today, Belgium has a quite clean electricity mix, largely thanks to its fleet of nuclear power. At roughly 6 gigawatts, these plants produced around 44 terawatt hours of power in 2019, making up almost half of the country’s total demand. Renewables produced close to 20 TWh (with 10 TWh of wind, 4 TWh of solar and some bio and waste incineration to make up the rest). The final part, around a third, was produced with mostly natural gas. The average emissions were roughly 170 gCO2/kWh, thanks to the relatively large share of fossil gas, as all the rest are counted as zero carbon.

Now, after years of back and forth, the Belgian Government has decided to order their nuclear fleet to be prematurely closed by 2025. From the reliability of supply perspective, it is a bold (or perhaps ignorant) move to order a closure of half a country’s energy supply inside just 5 years, but that is another story. To replace the lost nuclear, the Belgian politicians have been thinking of supporting more wind and natural gas. And as the combustion of methane grows, its share will grow from the current share of a bit over third to a share of almost 60%. This will result in greater emissions per average kWh of electricity produced. Belgium is the only European country, according to the study, that sees the share of fossil fuels grow significantly by 2030.

There is no doubt that this is very pleasing news for the producers of natural gas, gas turbines and gas engines. Not only does it increase the short- and medium-term demand for their product, but also strengthens the hold and lobbying position that the gas industry has on the European headquarters in Brussels. In a cynical move, even the local Greenpeace brushed aside their climate ambitions as they stated that supporting gas infrastructure is a “necessary evil.” It does, after all, get them rid of their most hated energy source, clean nuclear.

The gas lobby is already flexing its growing influence. The industry is hard at work in greenwashing natural gas to be somehow included in the new European taxonomy for sustainable investments. The gas industry used some ten times more money to lobby the taxonomy compared to the nuclear industry, for example.

And how has this move been green-washed in Belgium, one might ask? By stating that it doesn’t matter what the emissions of Belgium’s electricity production are, as they can (and need to) buy emissions credits from the European Emissions Trading System (EU ETS) to make it all right. And in a way this is true, since there is only a set amount of emissions credits in the ETS, so someone else will need to burn a bit less to give Belgians their dirtier power.

But can we all follow the lead of our EU heartland and do the same then? If the rest follow Belgium’s example and replace clean energy with fossil fuels, how likely is the planned tightening of the ETS to meet our Paris goals to pass, politically? Even more worryingly, will we even have an emissions trading system a couple years down the road, as the ETS prices climb exponentially with more countries increasing their fossil fuels use, just like Belgium is planning on doing?

A version of this article was previously published in Finnish in Verde.