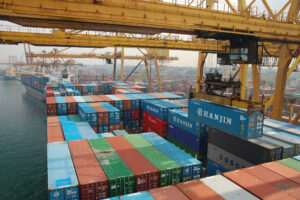 The ancient Silk Road was a historical network of trade routes stretching from China to Europe. It was established around 2,000 years ago, during the Han Dynasty – often considered China’s golden age.

In 2013, Chinese President Xi Jinping officially announced China’s aspiration to recreate this network. The 21st century Silk Road, also called the Belt and Road Initiative, is the world’s largest infrastructure project in decades, with conservative estimates suggesting that its cost will exceed US$1 trillion.

The creation of the New Silk Road involves the massive development of trade routes and infrastructure corridors, including everything from railways, airports, ports, pipelines, industrial parks and real estate projects to free trade agreements and treaties. It has the potential to reshape the world in political, economic and cultural terms, and poses important environmental risks. It is also profoundly altering cities across the globe – prioritising wealth and threatening vulnerable communities.

My recent research focuses on three cities on the New Silk Road. In Athens, Chinese state-owned shipping and logistics company COSCO is privatising and extending the city’s Piraeus Port. The company seems to be aiming to make Piraeus a gateway for Chinese products to enter Europe.

The second city is Colombo, where the China Harbour Engineering Company is leading a sea reclamation project. The goal is to create a new city from the ocean. Colombo Port City is expected to become a key hub for the Maritime Silk Road.

Finally, in London, Chinese developer Advanced Business Park is supporting the transformation of the Royal Albert Dock from a 35-acre derelict, post-industrial site to a global business zone.

In all three cities, urban space is being altered through a combination of transport infrastructure, real estate and commercial projects. These range from the creation of luxury apartments and hotels, exclusive clubs and office towers to international trade corridors.

The projects of the New Silk Road have caused problems for vulnerable communities in these cities.

In Athens and London, Chinese investment has led to rising rents which tends to undermine the security of local people in their homes. Piraeus is becoming an industrial zone incompatible with housing: local committees and a number of scientists have expressed their fears about the release of hazardous waste in areas adjacent to primary schools, homes and playgrounds. In London, ABP’s development is aimed at wealthy investors rather than local residents – the Royal Albert Dock is located in Newham, a deprived borough of East London.

In Colombo, the Port City is based on a type of urban regeneration that targets corporate investors and aggravates the displacement of low-income residents and multi-ethnic communities. The project includes luxury hotels, shopping malls, high-end flats, beachfront villas, private gardens, casinos and skyscrapers.

There are fears that extended sand excavation will have negative impacts on Colombo’s coastline and fishing breeding areas, affecting the livelihoods of people who depend on fishing.

My research also shows that labour organisations and workers’ rights have been dismantled in both Piraeus and Colombo, and promises of jobs remain unfulfilled in all three cities. Grassroots organisations are either completely excluded from decision making, it seems, or are invited to participate in workshops that have no real power. It indicates that protests against development projects are suppressed, in ways ranging from a heavy police presence on demonstrations to forced evictions. However, local resistance to these projects remains.

Belt and Road Initiative projects signal the increased role of foreign investment in shaping contemporary cities. Important public infrastructure, such as ports, is now under Chinese ownership or management in the heartlands of capital cities. The projects also involve the establishment of special enterprise and economic zones, which provide tax breaks and simplified planning procedures to attract foreign investment.

The New Silk Road is changing cities, positioning them as hotspots for wealth, free trade and luxury. It is not just Chinese influence that is driving these projects in a certain direction. It’s clear that national governments and private interests in each country are playing their part too. The branding for the projects in Piraeus, Colombo and London makes the national aspirations for these initiatives clear.

Colombo is being touted as the new Dubai, and Drapetsona, a working class area adjacent to Piraeus, the new Docklands – an area of London well known for its urban regeneration. Royal Albert Dock is being positioned as London’s third financial district after Canary Wharf and the City of London.

The Belt and Road Initiative puts private profits above any other social and spatial consideration. Urban areas become “non places”: spaces which look the same, without historical reference points or local character. It erases people’s histories to re-invent urban spaces as trade corridors and places of entrepreneurship and consumption. It prioritises a kind of urban development that deepens spatial division and social segregation.

This article was written by Elia Apostolopoulou, a senior research associate at the University of Cambridge. It is republished from The Conversation under a Creative Commons license. Read the original article.