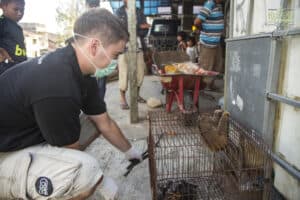 The illegal trade in pangolins and slow lorises in Indonesia has gained a lot of media attention, yet that has had only a small effect on combating the actual trade itself. In many areas of the country, these two critically endangered species have gone extinct due to a lack of law enforcement and specialized protection.

For years, animals confiscated from poachers and traders were released back into the wild without proper rehabilitation. Indonesia loses up to 10,000 pangolins and thousands of slow lorises a year to illegal trade, although the numbers could well be even higher.

As the trade has largely moved from the street to the Internet, it is even more difficult to estimate the real volume of trafficking in exotic wildlife. What is undeniable, however, is that pangolins and slow lorises are quickly disappearing from Indonesian forests.

The problem lies not in local environmental laws, which are fairly good, but in insufficient enforcement of them. Even though enforcement authorities confiscate live animals or the parts of dead ones, the poachers, traffickers, sellers and buyers are rarely punished. This sends a clear message that they can continue their business as usual without much risk.

In addition, the island of Sumatra, which, according to a 2017 report by the anti-trafficking network TRAFFIC, is a hotspot of the illegal trade in pangolins, does not have any specialized facilities for confiscated animals. Pangolins and slow lorises usually end up in small cages without proper rehabilitation and when they are released back into the wild, no one monitors their progress. It is highly probable that the majority of these animals die.

The situation on Sumatra has been improving, however, thanks to the Kukang Rescue Program, the first and only specialized rescue and rehabilitation center locally for pangolins and slow lorises. The construction of the center started in 2015 and is still underway and has two separate departments.

The Kukang Rescue Program focuses on slow lorises and has a capacity of 30 animals while the Trenggiling Conservation Program, which is currently being built, is dedicated to saving pangolins.

“Establishing a rescue center with a well-designed rehabilitation and release program is an absolute necessity,” explains František Příbrský, a Czech conservationist who founded the first rescue center specialized in confiscated pangolins and slow lorises in North Sumatra.

The confiscated animals undergo a veterinary inspection, after which they are put into quarantine for a minimum of six weeks. Afterwards, the animals go through a rehabilitation process, which can take several months. Healthy animals are moved to an enclosure in their area of release where they continue to be monitored with a collar equipped with a transmitter so that after several months of monitoring it can be determined how well they have adapted to their new home.

After a few years of conservation work František and his team realized that they should work closer with the local community as many locals hunted and poached wild animals to gain extra incomes. In 2017, the conservationists decided to employ two former poachers to help protect hundreds of animals that would have otherwise been hunted.

That same year they started the Kukang Coffee Project for farmers who live in the area of the natural habitats of protected animals. Farmers are taught to produce high-quality coffee, which is bought by the Kukang Rescue Program for a higher price than they would get on the market. On exchange for this, locals promise not to hunt slow lorises and pangolins.

The farmers work with the two former poachers who ensure that the farmers do indeed keep their promise. To further raise awareness about animal protection and nature conservation, the team has also started a environmental school for local children.

Besides these efforts, the Kukang Rescue Program and the Trenggiling Conservation Program also cooperate with various zoos in the Czech Republic and elsewhere, with international zoo associations, and with other conservation-focused NGOs in order to raise awareness of the illegal wildlife trade.

Příbrský is a member of the Stolen Wildlife campaign, which warns people about the causes and consequences of the wildlife trade.

By saving wild animals, people will also be saving themselves, Příbrský stresses.

“It strikes me that all the world is currently so concerned only about the protection of people against the COVID-19. I understand that vaccination is now topic number one but almost nobody talks about the real cause of the problem, which is the illegal wildlife trade. It’s absurd how little attention this topic is given in the mainstream media,” Příbrský says.

“The current pandemic has shown that the trade in some wild animals and their parts, namely bats and pangolins, is a global issue. If we don’t do anything about stopping the trade, we can cause many even deadlier pandemics that will threaten each of us,” he adds.

According to an IPBES Pandemics Report, some 1.7 million still undiscovered viruses exist in mammals and birds, of which up to 827,000 could have the ability to infect people. Almost all new viral outbreaks, including HIV/AIDS, Ebola, Zika and COVID-19, are zoonotic diseases that have spread by close contact between wild animals, livestock and people. Black markets for wild animals are hotspots of transmissions.

Combating the illegal wildlife trade is a difficult task, but as conservationist efforts like the Kukang Rescue Program demonstrate it is doable.

“Building ties with locals and offering them financial remuneration for nature conservation bears fruit,” Příbrský says. “Since 2017 the hunting of protected and threatened species in the area where we work has completely stopped, farmers are satisfied with their extra income, former poachers have found stable employment and the end product cheers up coffee lovers.”

The post An initiative in Sumatra leads the way in saving endangered pangolins and slow lorises appeared first on Sustainability Times.