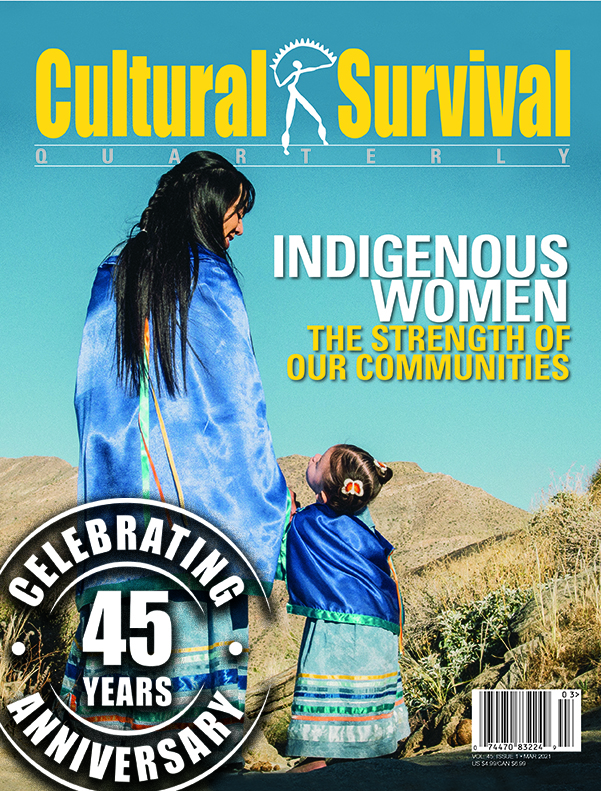 45-1 Indigenous Women: The Strength of Our Communities

Jannie Staffansson (Saami) is a renowned Indigenous climate change expert. She lives in Jokkmokk, Sápmi, in the north of Sweden, where she works with her partner and her beloved reindeer. She holds a degree in organic and environmental chemistry from the University of Gothenburg, and is a former representative of the Saami Council to the Arctic Council; a member of the executive committee of the Sustaining Arctic Observing Network; former Indigenous representative in the Arctic Science Summit Week steering committee, the former Arctic Focal Point of International Indigenous Peoples Forum on Climate Change; and a Cultural Survival board member. Staffansson was a member of the Arctic Council Working Group on Assessment and Monitoring Programme and its associated expert groups on black carbon and methane, persistent organic pollutants, and climate change. Now, Staffansson has her own consulting business serving Saami communities and organizations.

Cultural Survival: Please tell us your personal story. How did you grow up?

Jannie Staffansson: I grew up in a reindeer herding family where my father was out with reindeer. We are one of the smallest reindeer herding communities in Sápmi. I went to the same school as the Swedish children and I grew up in a non-Indigenous town where we are the minority. It was sometimes difficult to balance those two very different cultures, and also quite difficult to explain my culture to my non-Indigenous friends. It was hard for them to understand my customs, my vision, and my worldview, whereas I could easily understand theirs because we attended the same school and learned the same things.

At home, I got different perspectives. I realized that Saami and Indigenous Peoples are not listened to and our knowledge is not valued—I quickly understood that listening to the dialogues at our kitchen table about the change in weather. The grownups in my Indigenous community spoke to each other about climate change. I told my father to go and tell the rest of the world about this, because it was not known or reported on the news. He just said, “Jannie, you go and do that. Get yourself an education and then they might listen to you, because they’re not listening to us.” I realized then that I needed to go and get an education. I studied science and chemistry for five years to understand nature at a micro level. 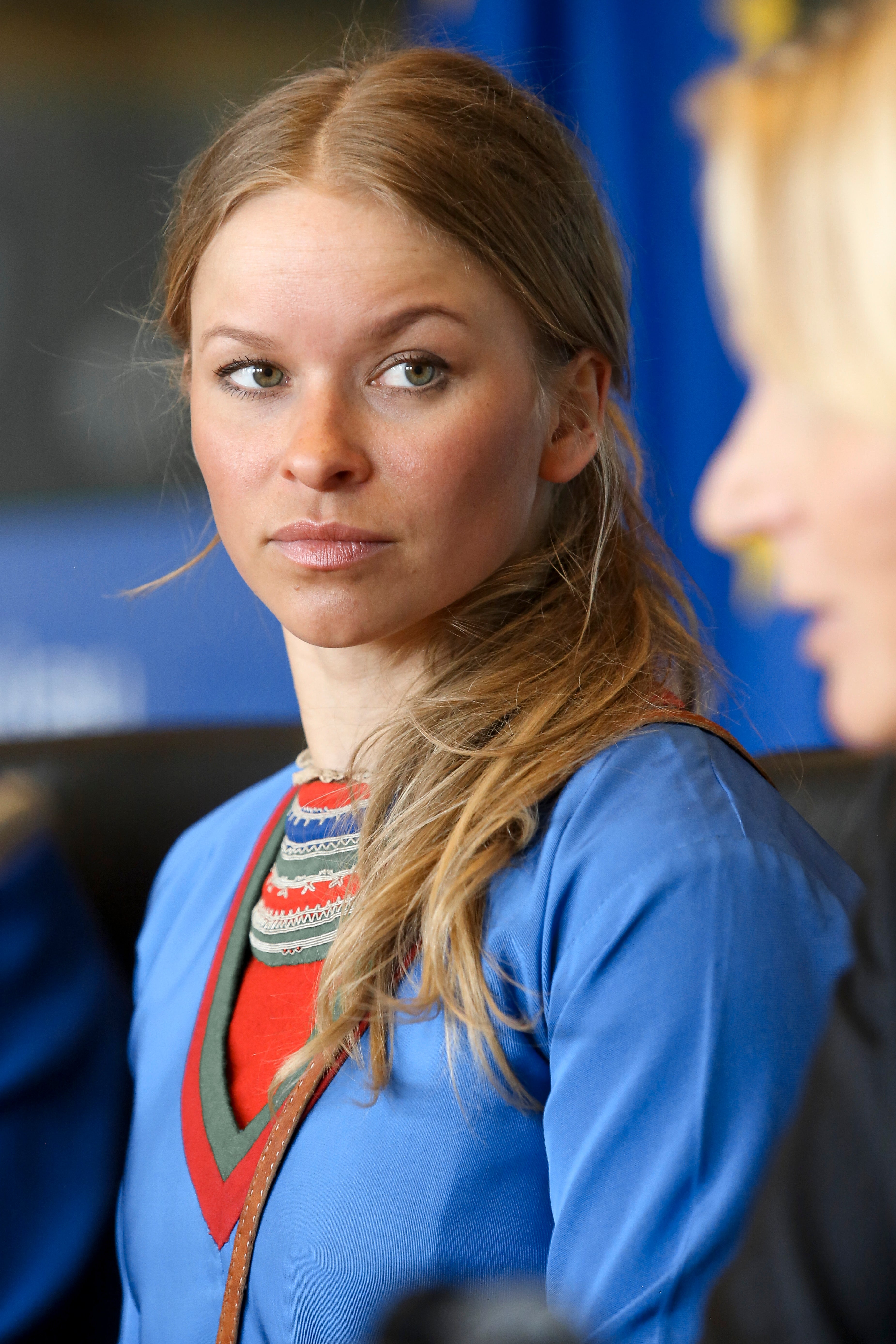 CS: What led you to choose your educational and current career paths?

JS: The things that my grandmother had taught me and people in my surroundings about medicine and healing from nature and how you prepare them were verified in my chemistry degrees, including medicinal chemistry. I also studied environmental chemistry, so my Indigenous knowledge and the knowledge that I received from my education in Western science fit quite neatly together. Together with both perspectives, I get a better understanding of what is happening.

I was brought up always defending and putting reindeer at the forefront, and myself and others second. Whatever difficulties the reindeer are facing, I have promised to protect them. They face threats from extraction industries, tourism, predators, and the politics of predators in the EU or Sweden, but also deforestation issues and climate change. My focus is on Indigenous science and knowledge and Western science working in combination to tackle climate change. When I studied environmental chemistry, climate change became the issue that I felt I could give more insight to. When decisions are made when it comes to climate change . . . it’s so complex and difficult to understand, we need the best science available.

And today, those that are deciding and those that are researching in non-Indigenous sciences, they don’t have all the best available knowledge, because Indigenous knowledge is often missing in that research. I feel very strongly that the mainstream society is tackling this huge crisis in nature and in our world backwards. World leaders and researchers know that Indigenous Peoples hold a lot of knowledge, and together we could come up with better solutions and make better decisions. But they are not interested because we have been colonized and stereotyped as being less and knowing less. Also, capitalism has been driving the entire climate change agenda.

CS: How do you balance a modern and traditional lifestyle?

JS: You have to balance since we live in both worlds. Our culture is also a very modern culture. However, some people might not view it as such. We have developed and are developing, but we don’t want to destroy nature for the sake of money. Our driving force is balance and sustainability; it’s still modern. Non-Indigenous society has helped us with vehicles like snowmobiles, which make it easier for us to get to our land and to help reindeer find better pastures faster, and supplementary feed that we can provide the reindeer when needed due to climate change. But of course, all of these things wouldn’t [be necessary] if climate change did not exist. We are adapting with those tools because of something that we didn’t create.

CS: Please tell us about your love for and relationship with your reindeer.

JS: The reindeer and the Saami, our history and our story have always been one in the same. In the Saami creation story, the world was created from a reindeer. Her eyes are the stars, her blood are the rivers, and her hair is the forest. She is the world that sustained us, and because of that relationship that has been for generations, she has kept us alive and we have helped her be alive, too. That is a sacred promise that we have made as a people to the reindeer. We are taught not to violate that. I am currently focused on educating myself further in Saami ways and strengthening my Indigenous knowledge in relation to reindeer herding. I heal when I’m far up in the mountains, off the grid, around my herding dogs and reindeer and giving back to Mother Earth.

CS: How are Indigenous women and their livelihoods impacted by climate change?

JS: Women are culture carriers in Sami society, as in many Indigenous societies, and because of that we feel the effects of colonization strongly. We’re living in non-Sami communities, towns, and cities, but we are also practicing our culture. It’s difficult being a culture carrier of language, religion, spirituality, food security, reindeer herding, stories, and handcrafts to actually pass on to the next generation. It is difficult when you are living as a minority.

Working as a herder demands a lot of physical strength, since we need vehicles to adapt to the changes and the increased fragmentation of the reindeer pasture land and land loss. Many women put their own interests and wants aside for the bigger picture. With climate change and all the other threats to the reindeer, many women go into education to be able to support themselves economically. Not many people can live on reindeer herding today; almost everyone has another job that creates income to help the reindeer to survive.

CS: What was your experience participating in the international human rights movement and global climate change negotiations?

JS: I worked for a Sami organization focused on Arctic and environmental issues. Because of that, I was brought into the UN policy negotiations before the Paris Agreement and the Local Communities and Indigenous Peoples Platform was created, which produced the United Nations Framework Convention on Climate Change. We were a great team that worked very hard representing Indigenous Peoples from every continent. We managed to create some good things. But I struggled with the fact that the negotiations were slow and ineffective and the willingness to take action was so low from countries, whereas at home, our reindeer are dying, and our people are also fighting because of climate change. Coming into a system and realizing that the decision makers do not really care whether or not you survive, that’s quite a rough thing to realize.

Of course there are good people in the system too, but it’s run from a capitalistic perspective, not from a sustainable worldview. It is very difficult for Indigenous representatives with our customs and visions to work with people who don’t understand our sacred relationships with nature. They have a relationship with money. It was difficult to communicate. Since we were there, always speaking up, we were able to impact some people and we managed to create certain things. But for me, it was a very toxic environment.

For me, what was important in this struggle against climate change and trying to change the situation for Indigenous Peoples, was meeting other Indigenous people and learning that they experienced the same thing. That made me realize that my life is so much more like my friends in Australia and New Zealand than that of my Swedish neighbors. We have the same struggles and we have the same worldviews and cosmovisions. We know what we need to do to stop climate change. Knowing that you’re not alone, that we are many who are strong, fighting, and succeeding in our fight, is something that gave me energy and has helped me to continue the fight.

Top photo: Reindeer are central to Saami culture and the Saami carry an obligation and responsibility to protect them. Photo by Jannie Staffansson. 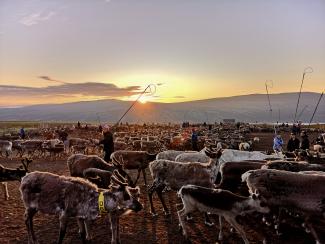