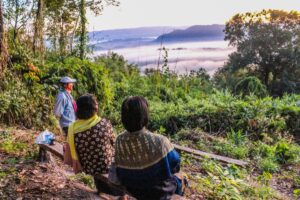 It’s one year since COVID-19 was declared a global pandemic. While the human and economic toll have been enormous, new findings show the fallout from the virus also seriously damaged nature.

Conservation is often funded by tourism dollars – particularly in developing nations. In many cases, the dramatic tourism downturn brought on by the pandemic meant funds for conservation were cut. Anti-poaching operations and endangered species programs were among those affected.

This dwindling of conservation efforts during COVID is sadly ironic. The destruction of nature is directly linked to zoonotic diseases, and avoiding habitat loss is a cost-effective way to prevent pandemics.

The research papers reveal the inextricable links between the health of humans and the health of the planet. Together, they make one thing abundantly clear: we must learn the hard lessons of COVID-19 to ensure the calamity is not repeated.

The findings are contained in a special issue of PARKS, the peer-reviewed journal of the International Union for the Conservation of Nature, co-edited with Brent Mitchell and Adrian Phillips.

Researchers found between January and May 2020, 45% of global tourism destinations totally or partially closed their borders to tourists. This caused the loss of 174 million direct tourism jobs around the world, and cost the sector US$4.7 trillion.

Over-dependence on tourism to fund conservation is fraught with peril. For example in Namibia, initial estimates suggested communal wildlife conservancies could lose US$10 million in direct tourism revenues. This threatened funding for 700 game guards and 300 conservancy management employees.

Emergency funds were raised to cover critical shortfalls. However in April 2020, rhinos were poached in a communal conservancy in Namibia – the first such event in two years. Researchers believe this may have been linked to the pandemic fallout.

More than 70% of African countries reported reduced monitoring of the illegal wildlife trade as a result of the pandemic. More than half reported impacts on the protection of endangered species, conservation education and outreach, regular field patrols and anti-poaching operations.

Rangers have also been hard hit. A global survey of nearly 1,000 rangers found more than one in four had their salaries reduced or delayed due to COVID-related budget cuts. A third of all rangers in Central and South America, Africa and Caribbean countries reported being laid off. Some 90% said vital work with local communities had reduced or ceased.

In more bad news, governments of at least 22 countries used the pandemic as a reason to weaken environmental protections for protected and conserved areas, or cut their budgets.

Many of the changes allowed large-scale infrastructure (such as roads, airports, pipelines, hydropower plants and housing) and extractive activities (such as coal, oil and gas development and industrial fishing). Brazil, India and, until recently, the United States have emerged as hotspots of COVID-era rollbacks.

SARS-COV-2 is very similar to other viruses in bats, and may have been passed to humans via another animal species. The pandemic shows the potentially devastating outcomes when animals and humans are forced into closer contact in shrinking habitats – for example, as a result of forest destruction.

As one paper found, during the last century an average of two new viruses spilled from animals to humans each year. These include Ebola and SARS.

Clearly, investment is needed to preserve the world’s protected and conserved areas, ensuring they act as a buffer against new pandemics. One study puts the required spending at US$67 billion each year – and notes only about one-third of this is currently being spent.

While it’s undoubtedly a large sum, the International Monetary Fund estimated late last year the pandemic would cause US$28 trillion in lost economic output in 2020.

Like many zoonotic epidemics, it appears COVID-19 was caused by the trade in wildlife and wild meat consumption. But diseases caused by uncontrolled land-use change – often for agriculture and livestock production – are just as dangerous.

The greatest risk, according to one group of researchers, is in forested tropical regions where land use is changing and a rich variety of mammal species are present.

As the special issue’s co-editors argue, if COVID-19 is not enough to make humanity wake up to the “suicidal consequences” of misguided development, then how will future calamities be avoided?

The cost of effectively maintaining protected and conserved natural areas is a small fraction of the cost of dealing with the pandemic and getting economies moving again. Imagine, for a moment, if the effort put into the development of vaccines were applied in the same measure to addressing the root causes of zoonotic pandemics.

In 2021, a series of international meetings will be held to decide how to stabilise our climate, save biodiversity, secure human health and revive the global economy. Through these events should run a golden thread: learn the lessons of COVID-19 by protecting nature and restoring damaged ecosystems.

This article was written by Marc Hockings, emeritus professor of environmental management at the University of Queensland. It is republished from The Conversation under a Creative Commons license. Read the original article.