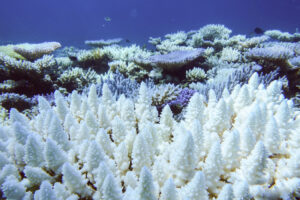 Our research, published today, paints a grim picture. We estimate that even under the most optimistic emissions scenarios, we’ll see dramatic reductions in coral reef growth globally. The good news is that 63% of all reefs in this emissions scenario will still be able to grow by 2100.

But if emissions continue to rise unabated, we predict 94% of coral reefs globally will be eroding by 2050. Even under an intermediate emissions scenario, we project a worst-case outcome in which coral reefs on average will no longer be able to grow vertically by 2100.

The latter scenarios would have dramatic consequences for marine biodiversity and the millions of people who depend on healthy, actively growing coral reefs for livelihoods and shoreline protection. This highlights the urgency and importance of acting now to drastically reduce carbon dioxide emissions.

Coral reefs are home to more than 830,000 species and provide coastal communities with food and income through fisheries and tourism.

Marine heatwaves, caused by ongoing ocean warming, have already had a severe impact on coral reef ecosystems by triggering mass bleaching events. These events are becoming more frequent and intense, and cause mass die-offs across large areas.

Ocean acidification also reduces the growth of corals by limiting their ability to build their skeletons from calcium carbonate. Together, these stressors threaten the ability of coral reefs to grow and keep up with sea level rise.

Our understanding of how ocean warming and acidification threaten reef-forming species has improved considerably over the past decade. However, understanding how coral reef growth will be altered by climate change is more complex than simply measuring rates of change from individual taxonomic groups of corals.

Our study of 183 reefs worldwide provides the first quantitative estimate of how most of the processes that control reef growth respond to climate change and affect carbonate accumulation and growth rates.

Cyclones, waves and currents can flush parts of the reef away. Acidifying ocean water means more dissolves chemically. And there is a biological carbonate exchange, known as bio-erosion. Sponges, parrotfish, sea urchins and algae can all eat it, but then return some as defecated sand.

To complicate matters, the frequency and intensity of marine heatwaves will vary geographically, making it difficult to estimate to what degree coral mass bleaching events will reduce coral cover.

In our research, we applied these local and global processes to 233 locations on 183 distinct coral reefs that vary in their species compositions and physical complexity. We found significant variability in responses to ocean acidification and warming.

We predict coral mass bleaching events will have the largest impact on carbonate production across all sites. The world’s coral reefs have already been transformed dramatically by these events over the past few decades.

We used the documented impacts of the 2016 mass bleaching on the Great Barrier Reef, which affected a large range of reefs with different species compositions, depths and latitudes. During this event, each reef experienced varying heat stress, which manifested in different levels of coral cover loss.

This information helped us to calibrate models to predict heat-stress events globally between now and 2100 and to gauge the future magnitudes of heat stress and their impact on our study sites.

We found currently degraded reefs fared poorly in our model, even under lower emissions scenarios. Reefs whose carbonate production was more robust against the effects of climate change tended to be those with high present-day carbonate production rates, higher contributions from coralline algae (which are also vulnerbable, but comparatively more resistant to warming than corals) and low rates of bio-erosion.

In higher emissions scenarios, even reefs dominated by coralline algae began to suffer as ocean acidification and warming intensified. It is also important to note that such reefs will provide different, and perhaps reduced, services compared to coral-dominated reefs because they are structurally less complex.

We did not explore in depth whether remaining coral reef communities could gain tolerance to rising temperatures over time. This could manifest as an increase in the proportional abundance of heat-tolerant species as more heat-sensitive corals die during mass bleaching events.

Surviving corals could acclimatise or even adapt. But whether these mechanisms could provide hope for the continued growth of coral reefs in the future — and if so, to what extent — is largely unknown. Nor can we say if more heat-tolerant corals could sustain similar rates of reef growth and structural complexity.

The best hope to save coral reefs and their ecological, societal and economic benefits is to reduce our carbon emissions dramatically, and quickly. Even under our projected intermediate scenarios we expect mean global erosion of coral reefs.

Under the lowest emissions scenario we examined, we expect profound changes in coral reef growth rates and their ability to provide ecosystem services. In this scenario, only some reefs will be able to keep pace with rising sea levels.

We owe it to our children and grandchildren to reduce emissions now, if we have any hope of them witnessing the majestic nature of coral reef ecosystems.

This article was written by a team of experts. It is republished from The Conversation under a Creative Commons license. Read the original article.