Peatlands worldwide are drying out, threatening to worsen climate change 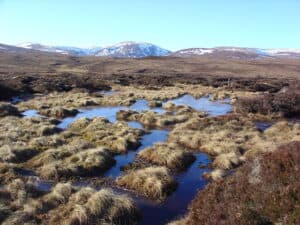 Peatlands, such as fens, bogs, marshes and swamps, cover just 3% of the Earth’s total land surface, yet store over one-third of the planet’s soil carbon. That’s more than the carbon stored in all other vegetation combined, including the world’s forests.

But peatlands worldwide are running short of water, and the amount of greenhouse gases this could set loose would be devastating for our efforts to curb climate change.

Specifically, our new research in Nature Climate Change found drying peatlands could release an additional 860 million tonnes of carbon dioxide into the atmosphere every year, by around 2100. To put this into perspective, Australia emitted 539 million tonnes in 2019.

To stop this from happening, we need to urgently preserve and restore healthy, water-logged conditions in peatlands. These thirsty peatlands need water.

They’re characterised by having water-logged soil filled with very slowly decaying plant material (the “peat”) that accumulated over tens of thousands of years, preserved by the low-oxygen environment. This partially decomposed plant debris is locked up in the soils as organic carbon.

Peatlands can act like natural archives, letting scientists and archaeologists reconstruct past climate, vegetation, and even human lives. In fact, an estimated 20,500 archaeological sites are preserved under or within peat in the UK.

As unique habitats, peatlands are home for many native and endangered species of plants and animals that occur nowhere else, such as the white-bellied cinclodes (Cinclodes palliatus) in Peru and Australia’s giant dragonfly (Petalura gigantea), the world’s largest.

They can also act as migration corridors for birds and other animals, and can purify water, regulate floods, retain sediments and so on.

But over the past several decades, humans have been draining global peatlands for a range of uses. This includes planting trees and crops, harvesting peat to burn for heat, and for other land developments.

For example, some peatlands rely on groundwater, such as portions of the Greater Everglades, the largest freshwater marsh in the United States. Over-pumping groundwater for drinking or irrigation has cut off the peatlands’ source of water.

Together with the regional drier climate due to global warming, our peatlands are drying out worldwide.

What happens when peatlands dry out?

When peat isn’t covered by water, it could be exposed to enough oxygen to fuel aerobic microbes living within. The oxygen allows the microbes to grow extremely fast, enjoy the feast of carbon-rich food, and release carbon dioxide into the atmosphere.

Some peatlands are also a natural source of methane, a potent greenhouse gas with the warming potential up to 100 times stronger than carbon dioxide.

This means if our peatlands are getting drier, we would have an increase in emissions of carbon dioxide, but a reduction in methane emissions.

So what’s the net impact on our climate?

We were part of an international team of scientists across Australia, France, Germany, Netherlands, Switzerland, the US and China. Together, we collected and analysed a large dataset from carefully designed and controlled experiments across 130 peatlands all over the world.

In these experiments, we reduced water under different climate, soil and environmental conditions and, using machine learning algorithms, disentangled the different responses of greenhouse gases.

Our results were striking. Across the peatlands we studied, we found reduced water greatly enhanced the loss of peat as carbon dioxide, with only a mild reduction of methane emissions.

The net effect — carbon dioxide vs methane — would make our climate warmer. This will seriously hamper global efforts to keep temperature rise under 1.5℃.

This suggests if sustainable developments to restore these ecosystems aren’t implemented in future, drying peatlands would add the equivalent of 860 million tonnes of carbon dioxide to the atmosphere every year by 2100. This projection is for a “high emissions scenario”, which assumes global greenhouse gas emissions aren’t cut any further.

It’s not too late to stop this from happening. In fact, many countries are already establishing peatland restoration projects.

Likewise, the Life Peat Restore project aims to restore 5,300 hectares of peatlands back to their natural function as carbon sinks across Poland, Germany and the Baltic states, over five years.

But protecting peatlands is a global issue. To effectively take care of our peatlands and our climate, we must work together urgently and efficiently.