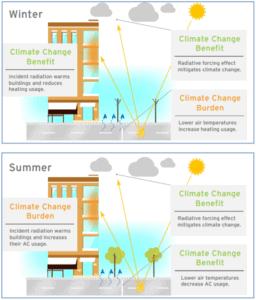 When heat waves hit, people start looking for anything that might lower the temperature. One solution is right beneath our feet: pavement.

Think about how hot the soles of your shoes can get when you’re walking on dark pavement or asphalt. A hot street isn’t just hot to touch – it also raises the surrounding air temperature.

Research shows that building lighter-colored, more reflective roads has the potential to lower air temperatures by more than 2.5 degrees Fahrenheit (1.4 C) and, in the process, reduce the frequency of heat waves by 41% across U.S. cities. But reflective surfaces have to be used strategically – the wrong placement can actually heat up nearby buildings instead of cooling things down.

As researchers in MIT’s Concrete Sustainability Hub, we have been modeling these surfaces and determining the right balance for lowering the heat and helping cities reduce their greenhouse gas emissions. Here’s how reflective pavement works and what cities need to think about.

Why surfaces heat up

All surfaces, depending on the amount of radiation they absorb or reflect, can affect air temperatures in cities.

In urban areas, about 40% of the land is paved, and that pavement absorbs solar radiation. The absorbed heat in the pavement mass is released gradually, warming the surrounding environment. This can exacerbate urban heat islands and worsen the effects of heat waves. It’s part of the reason cities are regularly a few degrees warmer in summer than nearby rural areas and leafy suburbs.

Reflective materials on pavement can prevent that heat from building up and help counteract climate change by reflecting solar radiation back to the top of the atmosphere. White roofs can have the same effect.

To estimate a pavement’s reflectivity, we use a measure called albedo. Albedo refers to the proportion of light reflected by a surface. The lower a surface’s albedo, the more light it absorbs and, consequentially, the more heat it traps.

Typically, the darker the surface, the lower the albedo. Conventional pavements such as asphalt have a low albedo of around 0.05-0.1, meaning they reflect only 5% to 10% of the light they receive and absorb as much as 95%.

When pavements instead use brighter additives, reflective aggregates, light-reflective surface coatings or lighter paving materials like concrete, they can triple the albedo, sending more radiation back into space.

Though the benefits of reflective pavements can vary across the nation’s 4 million miles of roads, they are, on the whole, immense. An MIT CSHub model estimated that an increase in pavement albedo on all U.S. roads could lower energy use for cooling and reduce greenhouse gas emissions equivalent to 4 million cars driven for one year.

And when materials are locally sourced, such as light-colored binders or aggregates, the crushed stone, gravel or other hard materials in concrete, these roads can also save money.

But not all paved areas are ideal for cool roads. Within cities, and even within urban neighborhoods, the benefits differ.

When brighter pavements reflect radiation onto buildings – called incident radiation – they can warm nearby buildings in the summer, actually increasing the demand for air conditioning. That’s why attention to location matters.

Consider the differences between Boston and Phoenix.

Boston’s dense downtown of narrow streets has tall buildings that block light from directly hitting the pavement most hours of the day. Reflective pavement won’t help or harm much there.

But Boston’s unobstructed freeways and its suburbs would see a net benefit from reflecting a large fraction of incoming sunlight to the top of the atmosphere. Using models, we found that doubling the traditional albedo of the city’s roads could cut peak summer temperatures by 1 to 2.7 F (0.3 to 1.7 C).

Phoenix could reduce its summer temperatures even more – by 2.5 to 3.6 F (1.4 to 2.1 C) – but the effects in some parts of its downtown are complicated. In a few low, sparse downtown neighborhoods, we found that reflective pavement could raise the demand for cooling because of increased incident radiation on the buildings.

In Los Angeles, where the city has been experimenting with a cooler coating over asphalt, researchers found another effect to consider. When the coating was used in areas where people walk, the ground itself was as much as 11 F (6.1 C) cooler, but a few feet off the ground, the temperature rose as the sun’s rays were reflected. The results suggest such coatings might be better for roads than for sidewalks or playgrounds.

An elegant solution, if used with care

Cities will need to consider all of these effects.

Reflective pavements are an elegant solution that can transform something we use every day to reduce urban warming. The full lifecycle emissions of roads, including the materials used in them, have to be factored in.

But as cities consider ways to combat the effects of climate change, we believe strategically optimizing pavement is a smart option that can make urban cores more livable.

This article was written by Hessam AzariJafari, a postdoctoral associate in engineering at the Massachusetts Institute of Technology, and Randolph E. Kirchain, co-director of MIT’s Concrete Sustainability Hub. It is republished from The Conversation under a Creative Commons license. Read the original article.