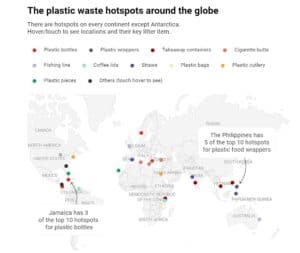 Coastal litter is a big environmental problem. But how does this litter differ around the world, and why? In the first global analysis of its kind, we set out to answer those questions using data collected by thousands of citizen scientists.

Our analysis, released today, discovered litter hotspots on every inhabited continent, including Australia. This finding busts two persistent myths: that most of the world’s plastic pollution comes from just a few major rivers, and that countries in the Global South are largely to blame for the marine plastic problem.

Single-use plastics formed the majority of litter in this study. And in general, litter hotspots were associated with socioeconomic factors such as a concentration of built infrastructure, less national wealth, and a high level of lighting at night.

Our insights reveal the complex patterns driving coastal pollution, and suggest there is no “one size fits all” solution to cleaning up the world’s oceans. In fact, the best solution is to stop the waste problem long before it reaches the sea.

We are scientists from the CSIRO’s Marine Debris Research team. Our study involved working closely with Ocean Conservancy and the PADI AWARE Foundation, which together hold the world’s most comprehensive litter data sets gathered by citizen scientists.

We analysed hundreds of thousands of items from 22,508 clean-ups on land (at beaches and the edge of rivers and lakes) as well as 7,290 seafloor clean-ups. The clean-ups spanned 116 and 118 countries, respectively, and involved participants recording counts for each item collected.

The analysis showed a huge diversity in the location and scale of plastic pollution hotspots. They were not limited to single countries or rivers – instead, the hotspots occurred in all inhabited continents and across many countries. In many places, litter patterns between neighbouring locations were vastly different.

In general, places with more overall litter tended to have:

Cities and other dense urban areas around the world were linked with hotspots of “convenience” single-use plastic items, such as plastic bags, food wrappers, drink bottles, take-away containers, straws, plastic cutlery and lids.

However, not all litter items followed this pattern. For example, cigarette butts followed a regional pattern and were more common in Southern Europe and North Africa.

Fishing line was most abundant in wealthier countries where recreational fishing is a popular pastime. Hotspots included Australia, the United Kingdom and the United States.

Clusters of hotspots were often associated with partially enclosed bays, seas and lakes. These included areas such as the Mediterranean Sea, the Bay of Bengal, the South China and Philippine seas, the Gulf of Mexico, the Caribbean Sea, Lake Malawi and the Great Lakes of North America.

Plastic accumulation in these areas is likely due to factors such as high local littering combined with relatively contained bodies of water.

Plastic bottle hotspots were more common in tropical countries such as Costa Rica and Jamaica, among others. Plastic food wrappers were abundant in the island nations of Southeast Asia, particularly around Indonesia and the Philippines.

Cleaning up our coasts

Ultimately, our study reveals the diversity and complexity of the plastic pollution issue. We hope it helps governments make waste policy decisions based on sound scientific evidence.

The findings suggest programs to tackle ocean litter should be rolled out at the grassroots level, or within one part of a country, as well as nationally.

In Australia, for example, Zoos Victoria’s Seal The Loop program aims to tackle localised fishing line waste at locations where the pastime is common. The program includes fishing line bins placed on piers and at boat ramps to encourage responsible waste disposal.

And in Malawi and 15 other countries in southern Africa, national bans on plastic bags target this locally problematic item.

Our analysis shows much non-degradable waste found in the environment comes from pre-packaged food and beverages. So regulations specifically addressing this type of packaging can be useful.

In Australia, for example, Hobart is aiming to become the first Australian city to ban single-use plastic takeaway food packaging, as part of an ambitious goal of zero-waste to landfill by 2030.

Other strategies known to change litter behaviour include recycling incentives such as container deposit schemes, particularly in lower socioeconomic areas where littering is highest, as well as education campaigns. And levies on plastic items could also help stop litter entering the environment.