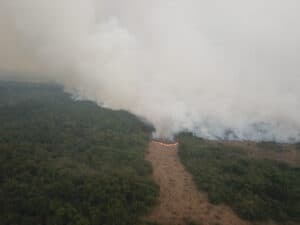 In Brazil’s Amazon region jaguars are becoming increasingly beleaguered and need protecting if their populations are to remain robust. Yet between August 2016 and December 2019 alone more than 1,400 of the majestic predators were killed or displaced from increasing deforestatio and wildfires.

This stark warning comes from the conservationist group Panthera, which assessed the status of jaguars during the study period in all areas of Brazil’s Amazon.

Scientists affiliated with the nonprofit estimate in a study that in all more than 1,400 jaguars were displaced or killed in less than years with nearly 500 of them in 2016 alone. Only in protected areas did jaguars escape being killed or displaced by deforestation, they add.

The findings indicate, the scientists say, that around 300 jaguars lose their lives each year on average in the Brazilian Amazon as a result of fires and habitat loss. And this number does not take into account other human-induced threats such as cattle ranchers killing the big cats in retaliation for attacking livestock.

“Headlines of wildfires devastating large swaths of habitats, even fast-moving wildlife populations and human communities are becoming the new normal around the globe, with ‘fire season’ emerging as a perennial state,” Fernando Tortato, a conservation scientist at Panthera who was a co-author of the study, said in a statement.

“But as our research shows, the scale of loss for jaguars alone with at least 300 individuals killed or displaced each year, is not a norm we can accept,” he added.

The scientists recommend monitoring the displacement and death of jaguars weekly through tracking deforestation rates via satellite and stepping up conservation efforts in the worst-affected areas. In addition, they advocate for creating new protected areas as well as making cattle farming more environmentally sustainable so as to reduce further habitat loss for jaguars and other animals.

“When habitat like that of the Brazilian Amazon is lost, it – and the jaguars that called this landscape home – tend to be lost forever. Unlikely to recover to its previous wild form, these forests are presumably destined to support agricultural developments, grasslands or livestock production, particularly with Brazil serving as the world’s second largest producer of beef,” said John Goodrich, Panthera’s chief scientist.

“While the jaguar is an impressively resilient species, it has already lost 40% of its range, and the disappearance of further habitat squeezes the species’ home range and its likelihood of survival in the long-term,” he added.

The Amazon is home to a quarter of the planet’s biodiversity and is a major contributor to natural cycles on Earth. Jaguars, which are apex predators in South America, are a keystone species, which means that they play a vital role in keeping their ecosystem in balance.

Although jaguars can often survive raging wildfires by moving away from affected areas, they are facing various other threats to their survival, including a loss of prey animals to fires and deforestation. “As they move into new and unknown territories, jaguar survivors are also likely to face conflict with other jaguars and particularly people whose livestock make easy targets for much-needed food,” Panthera explains.