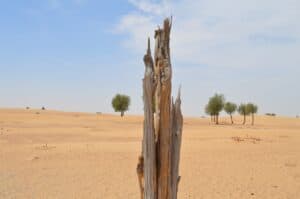 The focus of the upcoming COP26, which is scheduled to run between October 31 and November 12, will be on worldwide carbon emissions and the daunting challenges of keeping the global rise in temperatures to a manageable level. That is already a lofty goal, but the delegates gathered in Glasgow, Scotland, and their British hosts should also address another issue of pressing concern: how the collapse of ecosystems fuels the global climate crisis.

Among the gravest environmental challenges facing numerous nations worldwide are ongoing deforestation, creeping desertification and the increasing loss of freshwater sources. Often these trends amplify one another in dangerous feedback loops, complicating efforts to reverse them. Intense forest clearing from the Amazon to Borneo, for instance, is depriving the planet of highly effective carbon sinks in the form of dense vegetation. At the same time, farming and agricultural production undertaken in areas where trees once thrived contribute to global greenhouse gas emissions, while intensive agriculture in other regions draws water away from seas and lakes that anchor entire regional ecosystems.

As a result, these manmade phenomena pose a grave threat both to fragile ecosystems and to global efforts to keep planetary warming within 2° Celsius, as per the Paris Agreement. Yet often lost in talks about the challenges of climate change is the issue of biodiversity loss.

The planet continues to lose some six million hectares of forest each year to clearing, with the vast majority of deforestation taking place in the tropics. Last year alone the loss of tropical forests equaled an area the size of the Netherlands, according to Global Forest Watch.

This rate of loss is disconcerting, since a healthy state of biodiversity is essential not only for life on Earth as we know it, but for human societies as well. “[Biodiversity] matters for human development, it matters for access to clean water, to sustainable nutritious food, and a whole host of other reasons as well,” Gavin Edwards, an expert at WWF International, says.

Encouragingly, participating nations at COP26 are expected to discuss solutions to massive deforestation and the repercussions of ongoing biodiversity loss alongside the impacts of climate change.

“Cop26 puts a heavy emphasis on trees – it’s there as an equal part of ‘coal, cars, cash and trees’ because [British Prime Minister Boris Johnson] personally believes protecting nature and biodiversity has to be a major part of how we tackle climate change. Alongside reducing carbon emissions from coal and cars, nature-based solutions are a priority. That’s why Cop26 sees the UK presidency pushing for a strong international agreement to halt and reverse deforestation by 2030,” a source at Downing Street told The Guardian.

Rapid deforestation and the increase in catastrophic climatic events like prolonged droughts and wildfires have highlighted the fragility of natural carbon “sinks” such as rainforests and wetlands. Recently scientists have found that forests in the Amazon produce more than a billion tons of CO2 a year, which means that they now emit more carbon than they absorb.

The main reasons for the reversal in the Amazon’s role as a major carbon sink include continued deforestation, which is also increasing stresses on local ecosystems inhabited by a host of endangered species. In other words, harmful human activities, coupled with the effects of a changing climate, often reduce the ability of existing forests to mitigate our emissions, even as these activities worsen the effects of climate change on embattled ecosystems.

“If we want to address climate change, we need to stop deforestation,” said Danny Marks, assistant professor of environmental politics and policy at Dublin City University in Ireland. “Unfortunately, compared to reducing fossil fuel emissions, forests are not getting the attention they deserve ahead of COP26.”

The threat of desertification

As the planet warms, the effects of our mismanagement of ecosystems often become magnified through accelerating processes such as desertification, which has been dubbed “the greatest environmental challenge of our time” by a UN expert. Once limited to such extremely arid regions as the Sahara, desertification is now happening across wide swathes of Asia and Africa, threatening the food and water sources of more than 2 billion people.

In tandem with creeping desertification, water shortages are becoming a fact of life across much of the planet. Major bodies of water like the Aral Sea and Lake Urmia were already drying up in decades past because of increased demands for water and environmentally disastrous policies. Yet now even the Caspian Sea, the largest enclosed inland body of water on the planet, is seeing its water levels drop by as much as 10cm a year owing to rising temperatures and other causes.

This is posing great challenges to several nations in Central Asia where other bodies of water are also shrinking fast. “Salt storms are an emerging threat for millions of people in north-western Iran, thanks to the catastrophe of Lake Urmia. Once one of the world’s largest salt lakes, and still the country’s largest lake, Urmia is now barely a tenth of its former size,” scientists explain.

A success story of environmental restoration

However, despite these grave challenges, we should not take it for granted that ecological collapse is inevitable – or that damage to the environment can’t be reversed. The fate of the Aral Sea, for example, is very different depending on which side of the Kazakhstan-Uzbekistan border you stand because the inland body of water has effectively split into two distinct parts.

The South Aral Sea in Uzbekistan has shrivelled into a strip of water in the west and an arid basin in the east. Not so its northern part in Kazakhstan, which has worked with the World Bank to  manage water flows feeding into its share of the Aral Sea. Kazakhstan’s portion of the Aral Sea is once again thriving thanks to intensive restoration aided by a $87-million project built and financed with assistance from the World Bank. A dyke known as the Kok-Aral Dam, which was a major part of the project, led to an increase of 3.3 meters in water levels after only seven months its launch in 2005, despite an expectation by scientists that it would take a decade for the water to rise that much.

“[T]he success has been astounding,” noted Masood Ahmad, the leader of the World Bank team that initiated the project in 2001. “Most governments usually give priority to generating incomes, like improving irrigation to increase crop production or water management so that they can supply water to cities. Environment and ecology improvements are the last thing that governments give priority to, but the Kazakhs did it.”

The benefits of the collaborative effort between Kazakhstan and the World Bank to save the northern portion of the Aral Sea have been as important in economic terms as they have been in ecological ones. Once on the brink of extinction, the fishing industry that long served as the lifeblood for Aral Sea communities like the city of Aralsk has progressively come back to life, with reported annual catches of 1,360 tons in 2006 rising to over 7,100 a decade later.

And the World Bank’s restoration project of the Aral Sea is far from complete. Several new projects are in the works in Central Asia aimed at restoring landscapes in the overexploited region, with the participation of innovators from 28 countries on five continents.

An ambitious plan for reforestation

The rescue of the northern Aral Sea demonstrates that ecological protection and economic growth can be achieved simultaneously. The governments getting ready to attend COP26 should work with industries and key stakeholders such as indigenous communities (who are often tireless guardians of natural resources) to hammer out long-term solutions to existential threats like deforestation and desertification, building on the example of the collaboration between the World Bank and countries like Kazakhstan to identify other targeted interventions and forward-thinking political initiatives that can lead to positive outcomes both for economies and the cause of environmental preservation.

A case in point is an ambitious plan for reforestation on a large scale in the United Kingdom, which has one of the lowest rates of woodland in Europe. The Northern Forest project, partly sponsored by the government, is expected to last a quarter century and cost £500 million.

In all, it will see some 50 million trees planted in a dense belt over 62,000 acres across northern England, generating £2.5 billion in benefits and capturing millions of tons of carbon just a few hours by train from Glasgow.

Although the project has its critics, who argue that newly planted forests have nothing on ancient woodlands when it comes to biodiversity, it is a step in the right direction. The plan, Bloomberg noted, “amps up a transformation” that has involved other efforts to “re-green the English landscape.”

“Trees are some of our most cherished natural assets and living evidence of our investment for future generations,” said Michael Gove, a former Environment Secretary in the UK. “This new Northern Forest is an exciting project that will create a vast ribbon of woodland cover in northern England, providing a rich habitat for wildlife to thrive, and a natural environment for millions of people to enjoy.”

Similar efforts aimed at regrowing forests and driving deserts back are underway elsewhere across the planet. Governments can and should do more to ensure the success of all such efforts.