Virtual reality can show people the harmful effects of deforestation 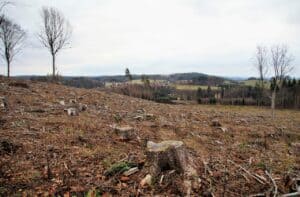 Environmental engineers are working with climate change activists to educate the public about various issues. Many urban residents feel less compelled to protect the global ecosystem than people living in the country.

One environmental problem professionals can target using the technology is deforestation. VR systems may help city residents evaluate their direct impacts on the Amazon rainforest. They can also invoke empathy in users, which may influence sustainable lifestyle changes.

Many people contribute to deforestation each day without knowing it. Simply using electricity can harm the environment. Nearly two-thirds of this power source used worldwide derives from fossil fuels.

These fuel sources release greenhouse gas emissions into the environment during combustion in electricity production. Emissions are the leading cause of climate change.

Regions with vegetation experience more frequent and intense wildfires as Earth’s temperature increases. These blazes cause mass deforestation over time.

Another climate change effect is an increase in evaporation. High evaporation rates can cause water displacement, which increases precipitation in some regions. The resulting flooding causes soil erosion, leading to decreased nutrient density and soil stability, which also leads to deforestation.

People opposed to certain issues based on their location experience a sociological phenomenon called “not in my backyard (NIMBY)-ism.” The term represents an “out of sight, out of mind” mentality. Residents typically can’t access compassion for a situation they are not a part of.

Different companies are creating apps that place users at the scene of ecological degradation. Many VR experiences expose users to the causes and effects of deforestation.

TIME is one company using VR technology to enhance deforestation awareness. Engineers at the company created an immersive app called “Inside the Amazon: the Dying Forest.” The app exposes users to wildfires, soil erosion and other causes of forest damage.

Another company, Viveport, uses the technology to increase rainforest awareness. Its app puts users in the shoes of a Kapok tree. Users experience the growth process from a seedling to a matured tree. Users also see the ecological struggles associated with deforestation in the Amazon. The tree may become weak from soil erosion, wildfires or nutrient depletion.

Users may also witness the effects of logging in the forest. People who understand the struggles trees face from human intervention may feel empathy. Their emotional response may lead to sustainable lifestyle alterations.

Using VR to expose urban dwellers to the natural environment can effectively enhance conservation efforts. Many people can’t feel empathy for forests and vegetation because of minimal exposure opportunities. Developers should understand emotional development in infants when exploring technology’s impact on empathy.

Before infants reach 18 months,  they develop an awareness of people’s actions and intentions. For example, when a little one sees their sibling crying, they understand they are sad. They also feel compelled to comfort them by hugging or holding them.

The visual display of tears invokes a physical response in children. Engineers can use the science behind empathy to create a science of climate urgency for people.

Environmental engineers view the benefits of virtual reality technology in climate change prevention. They must challenge ecological downfalls before exploring alternative uses of VR in the sustainability sector. Headsets rely on electricity, which generally derives from fossil fuels.

Users can minimize the technology’s adverse ecological effects by limiting a device’s time on the charger. After VR headsets reach a full charge, they continue pulling power from outlets. The overconsumption of electricity can increase greenhouse gas emissions and induce deforestation.

Engineers are consciously using VR technology for good by exposing people to other climate change occurrences. A team of developers released a VR app called “Greenland Melting.” It displays a 360-degree representation of Arctic ice loss.

It also shows the transition from pre-industrial Arctic glacier sizes to current ones. Examining climate change’s effects on the animals and ecosystem in the north may promote an empathetic response. People may believe the scientific findings relating to temperature change after engaging in the VR experience.

Where should people implement the technology?

Climate change professionals can use VR technology to spread awareness and meet global conservation goals. Professionals may place it in museums to help visitors assess their direct impacts on the environment.

It can also be integrated into public school systems. Using VR headsets to display climate change science to kids can build urgency for change. Scientists at research centers may also utilize the technology to explore specific issues and develop effective solutions.