Scientists use 3D printing to help save embattled coral reefs 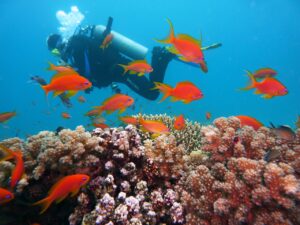 The ocean covers most of the planet’s surface and is home to countless marine species. Ensuring the survival of marine life, whether microscopic bacteria or blue whales, is essential to maintaining a balanced ecosystem.

However, many marine species are currently endangered, and some face the threat of extinction. These include coral reefs, which is why ensuring that coral reefs survive is a crucial imperative.

Scientists know this and many researchers are using advanced technologies such as 3D printing to combat coral reef extinction.

Protecting coral reefs is essential. According to the International Union for Conservation of Nature (IUCN), coral reefs harbor the highest biodiversity of any ecosystem, but they are also the most threatened.

Even though reefs only cover 0.1% of the ocean floor, they are home to more than one-quarter of all fish species, offer protection against flooding, provide subsistence food, and sustain the fishing and tourism industries.

Coral reefs also add value to the United States economy and one independent study has found that they provide $483 million in net benefit annually.

Technology plays a significant role in supporting coral reefs in the oceans. One technology carving out its place in conservation is 3D printing, which uses various materials to create physical objects from a digital design.

3D printing is a growing field and comes with many applications and use cases. Some examples include building aircraft and car parts, medical prosthetics, and even human tissue and organs. Scientists and ocean conservationists are currently discovering that 3D-printing artificial coral reefs can help with conservation efforts.

Artificial coral reefs are typically made out of lime or sandstone, and one of their primary purposes is to attract free-floating coral polyps. Coral polyps attach to artificial corals and grow into full-fledged colonies, eventually creating an entirely new, living coral reef.

Other uses of 3D printing to combat species extinction

More companies in various industries are trying to establish environmental, social and governance (ESG) practices to appeal to more consumers. According to PwC, 83% of consumers want companies to develop ESG practices, as it can impact purchasing decisions.

One essential component of ESG is considering the environment and how business practices positively or negatively affect it. The latest technologies, such as renewables, artificial intelligence (AI) or even 3D printing, can help companies achieve their ESG goals.

3D printing for artificial coral creation is only one use case example. 3D printing is applied in other ways to support animal species.

Poaching is a serious issue facing rhino populations that could ultimately lead to extinction. Rhino horns are valuable in the illegal wildlife trade, which drives poaching activity. One biotech startup, Pembient, is producing 3D-printed rhino horns as a sustainable alternative.

Pembient uses advanced technology to create substances similar to those in a natural rhino horn. The company hopes to produce these artificial horns to stop poaching and protect rhino populations.

Safe pollination is crucial for bee populations, which play a vital role in the ecosystem. Colonies are dying off at alarming rates.

One solution that may help preserve bee populations is 3D-printed flowers. In Brisbane, Michael Candy created a synthetic pollenizer to provide a safe space for bees to pollinate, supporting conservation efforts.

The “Techno-Tortoise” is a highly realistic model of a baby tortoise that attracts predators without putting infants at risk.

3D printing can offer plenty of solutions for conservationists, but some issues need to be addressed.

3D printing relies on plastics and printers, which add to energy consumption. Additionally, it’s understood that some 3D-printed products have short lives. For these reasons, it’s argued that it’s not the most eco-friendly technology.

3D printing technology is quite complex for people without specialized knowledge. Some advocates called it a “disruptive” technology, but not all industries have adopted it.

Regardless, 3D printing has a bright future, especially in wildlife conservation efforts. It will be interesting to see how it can help animal species thrive and combat extinction.

Until 3D printing is more widely adopted, it may not be used by conservationists or scientists looking to protect marine or land animal species. However, other technologies will likely play a growing role in protecting animal species, so expect more use cases to emerge.