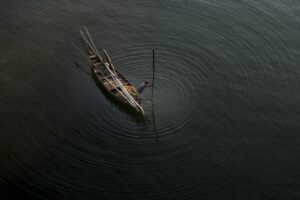 Shared fish stocks of hundreds of marine species have been historically exploited by many countries across the world.

The United Nations has set ambitious sustainable development goals (SDGs) including SDG 14 — life below water — which includes the sustainable management of all fisheries by 2030. Achieving this goal will have clear benefits for several other societal SDGs such as zero hunger (SDG 2), reducing inequalities (SDG 10) and ensuring good health and well-being (SDG 3).

However, to achieve this we need anticipatory, equitable, adaptive and internationally collaborative work because the successful management of fish stocks shared among nations depends on it in a changing world.

Nobody asked the fish

In 1982, the United Nations created exclusive economic zones (EEZs) — areas of sea that provide exploitation rights over marine and energy resources to coastal nations. One of the main reasons for this delineation was to improve the management of fish stocks.

However, it did not consider the natural geographical distribution of living marine resources — that is, nobody asked the fish. And since distribution of marine species in the ocean is partially shaped by environmental preferences, fish freely cross EEZs.

These species include Pacific salmon shared between the United States and Canada and Peruvian anchoveta shared between Chile and Peru, among other important commercially exploited fish. Between 2005 and 2014, national fleets targeting these transboundary species within EEZs caught an annual average of 48.5 million tonnes.

However, despite their economic importance, the exploitation status of marine species is largely worse when a stock is shared than when it is contained within a single EEZ. While the sustainability of these stocks depends on international co-operation, that’s a challenge when stocks shift their distribution because of climate oscillation and global climate change.

Climate change is here to stay

Oceans are getting warmer, less oxygenated and more acidic. In response, marine species are on the move, looking for new places with the environmental conditions they have historically preferred.

As stocks move across international jurisdictions, fisheries management plans for transboundary stocks might not be adapted to cope with species on the move.

We can imagine that if a fish stock is shifting from our EEZ to our neighbour’s, we would catch as many fish as possible before it leaves for good. In contrast, our neighbour has the incentive to save the stock because of its increasing future stake.

My team estimates that 4,119 transboundary stocks will experience a similar shift across 81 per cent of the world’s EEZs by the end of the 21st century.

While these fish have been changing their geographical area since 2006, our models predict most shared fish stocks will shift over the next two decades. Changes in catch proportion — the quantum of shared stock each EEZ can take — will follow the shift in the geographical distribution of the fish stock for 85 per cent of EEZs. So, if a fish stock is moving south, the southern country will have more catch.

The distribution of the shifting shared fish stock has led to international conflicts like the “mackerel war”, over-exploitation of important fish stocks like the Pacific salmon and the breaking off international treaties as in the case of Russia and Norway.

Existing international fisheries agreements need to be assessed for their capacity to address the implications of climate-change-driven transboundary shifts. The new agreements will need to be anticipate these uncertain shifts to be resilient to global change.

Fisheries management plans that are not designed or prepared to respond to species on the move will be less resilient to climate change. Climate change needs to play a part in the plans and agreements.

We need adaptation strategies like the strengthening of current partnerships by, for example, transforming verbal agreements into binding official agreements. These strategies also include improving international co-operation and management rules that capture the distributional shifts of fish stocks by, for example, setting catch limits based on where the fish are.

Quota allocation methods — the amount of fish that we can take from the water — are often based on a stock’s fixed-historical distribution, but must be more agile and potentially move toward a dynamic method that captures the shifting stock.

In some cases, rules will need to be implemented to deal with nations that weren’t part of the original agreement and want to fish a stock that reaches their waters for the first time, or to establish management boundaries in newly occupied regions. However, the transition from historic to dynamic methods may encounter strong resistance from stakeholders that are “losing” benefits from a fishery they have historically been entitled to.

Further research and documentation on how to move toward inclusive dynamic management (quota allocation formula, conflict management) is key to adapting and building resilience in transboundary fisheries management to shifting stocks.

The future is uncertain. We experience that in everyday life, and probably even more now in the context of the COVID-19 pandemic. Climate change is no different.

While the last Intergovernmental Panel on Climate Change report established that human activities have warmed the Earth over the past 50 years, the future is also dependant on the global human actions — like meeting the Paris Agreement targets.

Mathematical models help us understand the natural world, imagining how the future will look, but they can always be wrong. Just think about how many times you’ve been mislead by your weather app, yet you still bring an umbrella if there is slight chance of rain.

That means developing anticipatory policies that deal with shifting transboundary fish stocks and the uncertainties associated with climate change is key to achieving the SDGs while ensuring effective governance of the world’s oceans.

This article was written by Juliano Palacios Abrantes, a postdoctoral researcher at the Institute for the Oceans and Fisheries of the University of British Columbia. It is republished from The Conversation under a Creative Commons license. Read the original article.

The post Cross-national fish stock management must focus on the impacts of climate change appeared first on Sustainability Times.