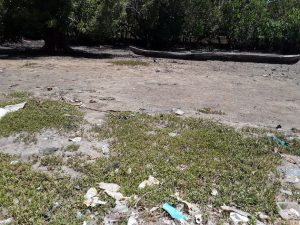 The global burden of disease stems from environment-related risks including animal-borne diseases such as COVID-19, climate change and exposure to pollution and toxic chemicals. Credit: Joyce Chimbi/IPS

Barnabas Kamau’s home sits on a wetland in Rumuruti Laikipia County in the Rift Valley region – considered Kenya’s breadbasket. He settled in the area 15 years ago, attracted by the wetlands’ fertile grounds as they provide favourable farming and livestock activities conditions.

But Kamau says the wetlands are fast disappearing and the amount of water in the area has decreased significantly leading to reduced land productivity.

“We are struggling to grow food for our families and for sale. Those that can afford to buy water for irrigation because the ground is too dry and rainfall unpredictable,” he tells IPS.

As Kenya’s rural population increases, increasing pressure on land amidst rising poverty levels and weak enforcement of environmentally friendly policies, the country is losing its wetlands, says Agnes Wanjiru, an environmentalist at the Ministry of Environment and Forestry.

“Wetlands are a most important environmental asset. They store excess floodwater during heavy rains. During the dry season, it is the wetlands that feed water streams preventing them from drying up. Wetlands are home to many plants and animal species and significantly support agricultural, livestock and fishing activities,” Wanjiru tells IPS.

“Today, we are losing our wetlands at a very alarming rate because of human activity including the conversion of these areas into settlements and for businesses such as car washes. In Murang’a County, for example, the most recent data show the wetland area has declined by about 48 percent from 2001 to 2018.”

Led by the United Nations Environment Programme (UNEP) under the theme ‘Only One Earth’, communities around the globe are marking World Environment Day on June 5, by putting environmental concerns in the spotlight.

World Environment Day is the UN’s primary platform to promote action for the protection of the environment by raising awareness on issues such as human overpopulation, marine pollution, global warming, wildlife crime and sustainable consumption.

Celebrated annually by more than 150 countries worldwide, the day is a global platform for environmental outreach, to also showcase initiatives at the country and global level in the promotion of environmental health.

Against this backdrop, Jasper Kimemia warns, it is the poor and vulnerable that will bear the brunt of ongoing environmental decline.

An environmentalist and independent researcher in industrialization and pollution, he tells IPS that wealthy nations continue to export negative impacts of their consumption and production through trade and waste disposal.

“At the current pace, developing countries will not reduce poverty and inequalities because when we measure development through GDP, we do not factor in environmental issues,” he observes.

“We are utilizing our environment in ways that will continue to significantly undermine progress towards ending our most pressing problems such as poverty and hunger.”

UNEP research raises alarm over the deteriorating state of planet earth and how this scenario threatens the achievement of health and well-being for all, sustainable economic growth, job opportunities and the promotion of peaceful and inclusive societies.

Further estimating that a quarter of the “global burden of disease stems from environment-related risks including animal-borne diseases such as COVID-19, climate change and exposure to pollution and toxic chemicals. Indoor and outdoor air pollution cause up to seven million premature deaths per year.”

Kimemia says there are tools to reverse the trajectory of environmental decline and promote harmony between people and nature by fully implementing international conventions and strengthening policies and regulations using scientific evidence.

Such evidence is contained in UNEP’s 2021 report ‘Making Peace with Nature: A scientific blueprint to tackle the climate, biodiversity and pollution emergencies’. The report is presented as a guide for decision-makers to take urgent desired action to save planet earth.

The report lays bare the gravity of earth’s triple environmental emergencies, climate, biodiversity and pollution through a unique synthesis of findings from major global assessments, and highlights interlinkages between the environment and development challenges.

According to the report coordinated action by governments, businesses and communities worldwide can prevent and reverse the ongoing environmental decline and its devastating effects on human and animal health, the economy and the capacity to build peaceful and inclusive societies.

In the absence of such coordinated efforts, not only are ongoing environmental protection efforts falling short, Wanjiru says the status quo is a threat to the future and survival of humanity and puts SDGs out of reach.

According to UNEP, none of the global goals for the protection of life on earth and for halting the degradation of land and oceans has been fully met.

Further extolling the many benefits of living sustainably in harmony with nature. UNEP estimates show “half of the world’s GDP is dependent on nature and every dollar invested in restoration creates up to 30 dollars in economic benefits.”

In the absence of far-reaching and sustainable restoration efforts, if ongoing deforestation and overfishing around the world continue, an estimated one million species of plants and animals could become extinct.

Research further shows while the world is on course to restore the earth’s protective stratospheric ozone layer, it is off course towards reducing air and water pollution and safely managing chemicals and waste.

“A lack of focus on environmental degradation has steered economic policy and investment in harmful directions,” UN finds, “this includes a reliance on fossil fuels and growing inequality, away from the fair and sustainable use of the planet’s finite resources.”