Sewage pollution: why the UK water industry is broken 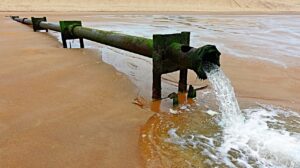 As a child swimming off the coast of south Devon in the 1960s, I believed the warm water passing through my legs was the Gulf Stream current. Now, as an adult, I realise it was actually raw sewage being discharged into the ocean.

In those days, it was not unusual for coastal towns to pump sewage out to sea where it was believed to be safely diluted. These pollution problems are now resurfacing because of poor management rather than ignorance six decades on.

One swimmer near St Leonards-on-Sea in east Sussex was recently hospitalised with a suspected ruptured spleen after swallowing raw sewage in seawater. Unlike coastal discharges, it has always been a requirement to treat sewage before it enters rivers. Even so, the quantity of raw sewage entering rivers is increasing.

Aside from faecal bacteria, there is a swarm of other health risks that come with swimming in contaminated water, not to mention a range of pollutants that current methods for treating wastewater fail to remove, such as microplastics and soluble drugs.

Sewage spills also damage the environment, including chalk streams: a globally rare shallow-water habitat that is largely found in England. Bacteria in the water that break down raw sewage consume a lot of oxygen, suffocating fish and other wildlife.

The bad news is that pollution incidents containing sewage have increased 29-fold in five years. How did the situation get so bad? And what can be done about it?

The UK’s wastewater network comprises both sewage and surface water pipes. Homes flush sewage to treatment works, where solids, bacteria and other contaminants are removed. The treated water is then discharged to rivers or the sea.

Surface water, meanwhile, drains from roofs and pavements and often goes directly into local rivers. When people build extensions to their homes, developers or plumbers can sometimes plumb sewage waste into the surface water drain by mistake.

It has been estimated that between 150,000 and 500,000 homes are misconnected in this way. These misconnections send raw sewage directly into the environment.

Sewage and surface water occupy separate systems, but the pipe network is interconnected and combined in parts, the idea being that during heavy rain, the surface water will flow into sewage pipes and dilute it.

Today, the opposite is often likely to happen, and it’s partly due to the country’s ancient and overburdened system for managing wastewater.

The network was designed by Joseph Bazalgette. Construction began in 1858 and was completed in the mid-1870s. There has been little investment to update the pipes or expand the treatment facilities in the intervening 150 years.

One exception is London’s new super sewer, which is due to enter service in 2025. Even so, the company responsible admitted it would need to be twice as big to prevent waste spilling into the Thames.

The UK has a sewage system built to serve half the population it must cope with today. Every new development, from small groups of houses to entire estates, increases the burden of sewage and expands the area covered by concrete and tarmac, which can add between 8% and 18% of additional surface water – the main reason for London’s flash floods in July 2021.

To begin tackling these problems would require policy reform in the water industry and beyond. But legislation in recent years has only made the problem worse.

England is the only country with a completely privatised water industry. Any pollution arising from these private water companies is monitored by the Environment Agency.

Routine monitoring of rivers and coastal waters is essential to ensure they’re in good condition. Because of funding cuts since 2010, water sampling by the Environment Agency halved between 2013 and 2019. The agency also lost its independence that year when it was absorbed into the Department for Environment, Farming and Rural Affairs.

Over 93% of serious pollution incidents have been downgraded since 2016. The government’s Environment Bill was recently amended to allow companies to delay improving storm overflows that spill sewage in high-priority nature sites until 2035, and for all sites until 2050.

UK water companies are commercial enterprises with operating profits for 2021 posted at £2.8 billion. Since 1991, £57 billion has been paid out in dividends to shareholders, of which most are based overseas and include banks, foreign governments, hedge funds and businesses based in tax havens.

Privatisation in 1989 saw all debt wiped, yet loans cost these companies £1.3 billion in interest in 2021.

Water companies are given a permit by the government to discharge treated sewage as legal operators. Many companies have received fines for breaching this by dumping increasing amounts of raw sewage. Southern Trent, for example, was recently fined £1.5 million. Meanwhile, the company’s chief executive is reported to take home £3.9 million in salary and bonuses.

Southern Water was fined a record £90 million for discharging raw sewage into the sea in 2021. But most fines are less than £2,000.

Water companies may need to be forced to invest in infrastructure if fines are not proving sufficient motivation. Failing that, revoking licences may become the government’s only way forward.

Liz Truss has many challenges ahead. The cost of making the UK’s sewage and surface water network fit for purpose has been estimated at a minimum of £150 billion, and perhaps as much as £500 billion.

This may be too much for water companies to absorb. Nevertheless, something as fundamental as sewage treatment and drainage infrastructure should be a national priority, and high on the to-do list of the new prime minister.

This article was written by Veronica Edmonds-Brown, a senior lecturer in aquatic ecology at the University of Hertfordshire. It is republished from The Conversation under a Creative Commons license. Read the original article.

The post Sewage pollution: why the UK water industry is broken appeared first on Sustainability Times.