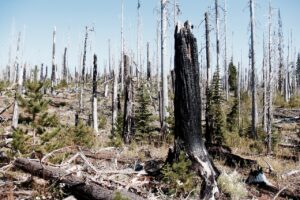 Once again California finds itself at the forefront in the fight against climate-related natural disasters. You wouldn’t know it from the scary images of fires engulfing homes, but policymakers actually have all the tools they need to improve our environment.

The recent Mosquito Wildfires are the result of human-created climate change, argue United Nations-affiliated researchers who have found that climate change worsens certain environmental conditions, such as increased incidents of droughts, worse soil quality, and higher temperatures. All of these elements increase the risk for dangerous wildfires.

One major driver for climate change is energy-intensive urban sprawl that pushes urban developments further away from urban centers. By making it easier to build dense housing in urban areas, we can combat climate change and protect human life and property.

The recent wildfires ravaging the west coast aren’t new, and they’ve been increasing in number and intensity the past few years. The years 2020 and 2021 were the worst on record for wildfires, and 14 of the 20 worst wildfires have occurred in the past 10 years alone. These shifts are the result of both past forest management decisions as well as ongoing, human-caused climate change.

California has experienced increased droughts and heat waves, both of which make wildfires more likely. As a result, wildfire management is becoming one of the most important issues for policymakers. And perhaps their greatest tool for both protecting current residents and their properties and mitigating future environmental harm is through zoning laws.

While zoning laws may not be obviously connected to climate change or the uptick in wildfires, urban land-use reform will not only help to reduce carbon emissions, but it will be the key to protecting Californians from wildfires and reducing the number of wildfires in the future.

Even if every resident of a sprawling California switched to an electric vehicle overnight, these environmental impacts would likely not change much. Electricity to fuel electric cars is still mostly fossil fuel based, and the roads cars drive on contribute further to environmental degradation.

Additionally, shifting more housing development into dense, urban centers that are less wildfire prone will protect residents from these disasters. In Northern California, the recent Mosquito Wildfire has destroyed 25 homes so far, highlighting the dangers of urban sprawl and the need for legalizing housing in urban centers.

In 2021 alone, over 3,000 buildings were destroyed by wildfires in California. Continuing to push housing development further into fire zones will only put more Californians in danger of serious loss of life and property damage. California policymakers must prioritize the need for building dense housing in urban centers to help prevent future wildfires and protect current residents.

California is notorious for its sprawled urban design. Nearly two-thirds of California land is zoned exclusively for single-family, standalone, residences. Despite California Governor Newsom’s 2021 ban on single-family zoning, this is unlikely to change much anytime soon as many localities are still fighting to maintain their exclusionary zoning practices in the state courts.

The vast majority of California localities, for example, impose a series of land and building requirements before construction can begin. These include minimum setback lengths from the main road, minimum lot size requirements, and maximum height requirements.

All of these regulations reduce the number of units that can be built in urban centers, incentivizing less dense development and pushing housing construction further out from the urban core.

Additionally, the long permitting processes and unclear rules may encourage developers to forgo dealing with urban development altogether, instead opting to build in less restricted rural areas. Cities like San Francisco and Palo Alto have, on average, permitting lengths ranging from 19 to 28 months. This creates a uniquely hostile environment to new development.

While talk of zoning laws and permitting lengths may not be obviously connected to climate change or the uptick in wildfires, urban land-use reform will not only help to reduce carbon emissions, but it will be the key to protecting Californians from wildfires and reducing the number of wildfires in the future.

Thankfully, California localities and Yes-In-MyBackyard (YIMBY) activists have been successfully pushing for positive change on this front. Recent legislation will begin to ban local parking mandates, and major urban centers like San Jose are beginning to acquiesce to the new normal without exclusionary zoning.

More can, and should, still be done to make abundant housing in urban centers a reality for California. Overhauling the California Environmental Quality Act (CEQA), which is often used to slow down the development of new housing construction with dubious environmental claims, would make permitting drastically simpler.

California’s future doesn’t have to be defined by environmental “doomerism.” There are real, practical solutions to the environmental challenges facing both California, and the world at large. It starts with land-use policies in urban centers.

Elijah Gullett is a Young Voices Contributing Fellow and the head of  the American Conservation Coalition’s Raleigh-Durham branch.