Was COP27 a Success or a Failure?

Egyptian Foreign Minister Sameh Shoukry, chair of COP27, reads the nine-page Sharm El Sheikh Implementation Plan, the document that concluded the climate summit on Sunday Nov. 20, to an exhausted audience after tough and lengthy negotiations that finally reached an agreement to create a fund for loss and damage, a demand of the global South. CREDIT: Kiara Worth/UN

It’s finally over. After the anticipation and build-up to COP27, the biggest climate meeting of the year is now in our rear-view mirror. The crowds of delegates that thronged the Sharm el-Sheikh international convention center for two long weeks have all headed home to recover. Many will be fatigued from long hours and sleepless nights as negotiators tried to seal a deal that would move the world forwards. Did all this hard work pay off? In our opinion, COP 27 was both better and worse than we’d hoped.

First, the bad news. COP 27 failed to deliver what the science tells us was needed. With the window of opportunity closing fast on our goal of limiting global temperature rise to 1.5C or less, COP 27 did far too little on the all-important issue of mitigation—that is, cutting emissions.

COP 27 failed to deliver what the science tells us was needed. With the window of opportunity closing fast on our goal of limiting global temperature rise to 1.5C or less, COP 27 did far too little on the all-important issue of mitigation—that is, cutting emissions

The case for urgent action keeps getting stronger. The latest reports from the Intergovernmental Panel on Climate Change (IPCC) make for grim reading about what to expect if we let temperatures rise too much. Nowadays, though, we just need to read the newspapers to catch a glimpse of the future.

The head of the key negotiating Group of 77 – 134 developing countries – was Pakistan which has been dealing with the worst floods in its history, leaving 1717 people dead and dealing an estimated $US40 billion in damage. In 2022 in the USA, there were 15 climate-related disasters which each exceeded $1 billion in costs.

Meanwhile, in Africa, according to Carbon Brief’s analysis of disaster records, “extreme weather events have killed at least 4,000 people and affected a further 19 million since the start of 2022.”

Since this COP was billed by some as the “Africa COP”, one could expect a strong response to such news.

The pressure was therefore on at COP 27 to respond to such disasters. Attending COP27 were 112 world leaders and over 300 government ministers: not as many as at COP 26, but still a good number. Something like 27,000 people from governments, intergovernmental, stakeholders, and journalists also attended the COP. This was to the backdrop of the UN Secretary General warning us that we needed to “cooperate or perish,” to take urgent action to take us off “a highway to climate hell”.

Messing up on mitigation: And yet progress on mitigation was modest, at best. While some delegations pushed hard for stronger commitments on cutting emissions, the appetite in some quarters just didn’t seem to be there. After being pressured to do more in Paris and Glasgow, China, India, and some of the oil-producing countries appeared reluctant to take much more in Sharm el-Sheikh.

They feel developed countries, which are historically responsible for the bulk of emissions, should be doing more themselves, rather than coercing others. The result was a negotiated outcome with little more on the table than we had in Glasgow. For instance, delegates could not agree to ramp up their language on fossil fuels, much to many people’s disappointment.

Finance: Likewise, there was not too much to report on the issue of climate finance. The $US100 billion annual support for developing countries initially promoted by Hilary Clinton at the 2009 Copenhagen COP and enshrined in the Paris COP in 2015 will be reviewed in 2024 with a new figure being hopefully agreed then for 2025 implementation.

The Global South has been talking of this new sum numbering in the trillions to help adapt and mitigate against climate change. And yet there were few signs of movement towards anything of that magnitude.

Given that the North has still not met its pledge of US$100 billion by 2020, it’s clear a lot of movement is needed in the next couple of years. Yet news from outside the conference, such as the US House of Representatives now having a Republican majority, does not bode well.

For a meeting billed as the “implementation COP” where climate action was taken to another level, the news on mitigation and finance was therefore disappointing.

Just prior to the start of COP27 the lead negotiator for Egypt Mohamed Nasr underscored: “science reports were telling us that yes, planning is not up to expectations, but it was implementation on the ground that was really lagging behind.” 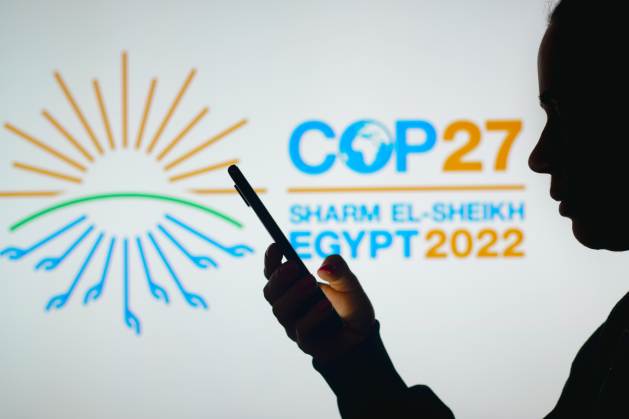 For a meeting billed as the “implementation COP” where climate action was taken to another level, the news on mitigation and finance was disappointing. Credit: Shutterstock

There were some bright spots, however.

Perhaps most surprising was the agreement to create a ‘Loss and Damage’ fund to help the most vulnerable countries. This has been a key issue for almost 30 years, particularly for small island developing countries.

In Glasgow this looked very unlikely to be resolved in the Sharm COP, but with a late change of heart by the Europeans and eventually by the USA and others in the OECD, this is perhaps the most significant and surprising outcome from COP 27. Even as recently as October, the signs were that OECD countries were not on board with calls for a new fund. However, at COP 27 the “trickle” of earlier action in this area turned into a flood.

Interestingly, it was Scotland at COP 26 that started things off, with a modest, voluntary contribution. More recently, Denmark, Austria, New Zealand and Belgium had also financial commitments to loss and damage, now amounting to $US244.5 million. Mia Mottley Barbados’ Prime Minister has called for a 10% windfall tax on oil companies to fund loss and damage caused by climate change, which could raise around $US31 billion if it had been introduced for 2022. Still, the signs a fund would be agreed at COP 27 had not been good.

This makes the final outcome all the more welcome. The idea, the door is now open for the most vulnerable countries to receive more support. A goal has now been set to fully operationalize the fund at COP 28 in a year’s time. For the most vulnerable nations, this cannot come quickly enough.

A lot of work will need to be done at the intersessional meeting of the UN Climate Convention’s subsidiary bodies in Bonn in June next year to prepare for this, including how to measure progress towards this Goal. An approach similar to the development of the Sustainable Development Goals in 2015 might be appropriate, perhaps?

Article 6: Another of the Glasgow breakthroughs was that on Article 6 of the Paris Agreement on carbon markets and international cooperation. COP 27 saw some solid work undertaken on how to operationalize this both in market and non-market approaches.

There are still a lot of sceptics on this will have a genuine impact and how to ensure not double counting or even that any offsets are real. An approach that is more ecosystem-based than just trees is gaining momentum. Such a change, if it happens, also offers a real chance to link the two major UN conventions on climate and biodiversity.

Agriculture: The work on the Koronivia Work Programme on Agriculture went down to the wire. The outcome was a four-year open-ended working group reporting at COP31 (2026). Some controversy on the term ‘food systems’ may see its first workshop address this issue.

It will also look at how we can better integrate the programme’s work into other constituted bodies such as the financial mechanisms of the convention. The Green Climate Fund has given only $US1.1 billion for adaptation on agriculture. It says one of the major reasons for this is the:

While these outcomes on agriculture, adaptation and Article 6 may seem modest, they should be welcomed as steps in the right direction.

Coalitions of the Willing: One of the outcomes from the Glasgow COP was the launch of ‘Coalitions of the Willing’; groups of countries and stakeholders wanting to move quicker on an issue than they might under the official UN negotiations, which are consensus-driven and involve more than 190 countries. In Sharm el-Sheikh we saw a number of countries join the Methane Pledge, including Australia and Egypt. China joined the meeting on the Pledge and committed to its own national methane strategy.

In Glasgow, 137 countries had taken a landmark step forward by committing to halt and reverse forest loss and land degradation by 2030. With the imminent return to leadership in Brazil of President-elect Lula da Silva, there is renewed hope that real action on the Amazon forests is possible again. Lula committed Brazil to reaching zero deforestation and was hailed as a hero by many when he turned up at COP 27 during the second week.

With $US150 trillion of combined balance sheets, the accountability mechanism announced of a new Net-Zero Data Public Utility is yet to prove if it is effective in holding the finance sector to their commitments. However, if it can deliver on its potential, this could be a game changer.

There was plenty more activity at COP 27 where the results are harder to measure. Most people at these large UN climate summits are not negotiators and COP 27 was full of “side events” and government and stakeholder pavilions each with its own set of events and agendas.

Country pavilions provided a venue to talk about their challenges, issue pavilions on oceans, food, water, health, education, and resilience highlighted their issues and how they fit into the climate agenda. These enable critical issues to be discussed in a more open way than could be undertaken in negotiations.

Ideas were shared, connections made, and partnerships for further action shared. The upshot of all of this activity is hard to measure, but probably considerable. The thematic days organized by the Egyptian Presidency also gave space to these issues and helped bring together ideas that may ultimately find their way into future UN decisions. In this respect, too, the quality of the side events and pavilions at COP 27 exceeded our expectations.

On to Dubai and COP28

Was COP27 a success or failure? When it comes to keeping up with the science, the answer can hardly be positive. The call to “keep 1.5 alive” hangs in the balance and is still on “life support”. In that sense, COP 27 had very little impact on our current trajectory, which is a likely warming of 2.4-2.8 C by the end of the century.

On the other hand, the promise of a loss and damage fund, as well as modest successes on adaptation, Article 6, agriculture, and actions outside the official negotiations, mean COP 27 delivered some bright spots of success.

Looking ahead to next year, COP 28 will be important as it marks the first “global stocktake” to judge where things now stand. We hope this will focus world leaders to increase their pledges (or “nationally determined contributions”) significantly. It will be interesting to see how the United Arab Emirates, as COP 28 host, performs. As a major oil producer, it faces some serious challenges in transitioning to a net zero world.

At COP 27, there were rumours the UAE was ramping up its team and bringing in additional external expertise ahead of next year. This is certainly a good sign if COP 28 is to deliver the kind of groundbreaking outcomes the science now demands.

Felix Dodds and Chris Spence are co-editors of the new book, Heroes of Environmental Diplomacy: Profiles in Courage (Routledge Press, 2022). It includes chapters on the climate negotiations held in Kyoto (1997), Copenhagen (2009) and Paris (2015).

COP 27 was both better and worse than expected, say Prof. Felix Dodds and Chris Spence