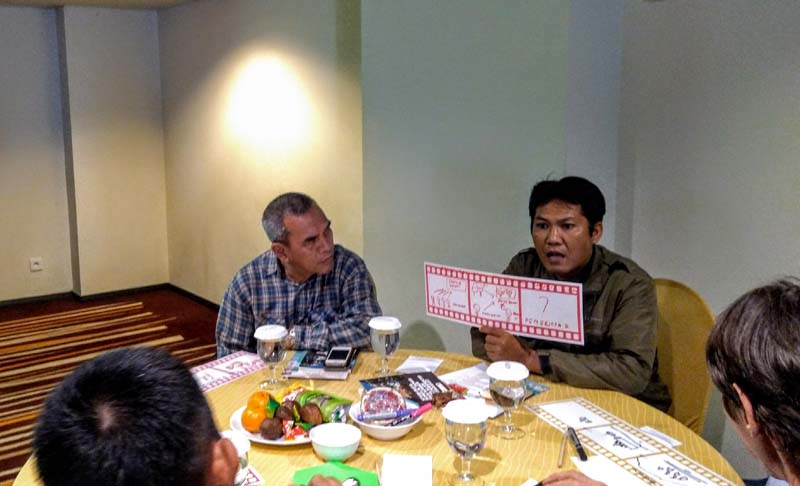 The Conflict Resolution Unit (CRU) together with the Indonesian Chamber of Commerce and Industry (KADIN) and the Penabulu Foundation again held a workshop on Strategy for Developing an Effective Conflict Resolution System for the Land-Based Business Sector. On this occasion, the workshop is intended for business actors in the land-based sector in Palembang. A total of 19 representatives of land-based companies operating in Palembang, South Sumatra participated in the workshop.

On this occasion, Husyam, M.Si, from KADINDA South Sumatra had the opportunity to open a workshop. Husyam appreciated the initiative to organize this workshop as a sharing space to discuss and exchange information or knowledge related to the development of the business sector in South Sumatra. “This time we will discuss the conflict and its resolution, which we have experienced, tell each other,” said Husyam in his speech.

Meanwhile, John Pieters Nazar, Chairman of the LEMBIS (Business Mediation Institute) of the Indonesian Chamber of Commerce and Industry (KADIN) stated that the Indonesian Chamber of Commerce and Industry pays serious attention to the development of conflict resolution efforts in Indonesia. This form of seriousness resulted in the establishment of the Business Mediation Institute (LEMBIS), which was also formed as support for the government’s efforts to promote mediation. “This is to support the government’s recommendation which recommends that business-related disputes do not always have to end in court, but can be resolved in other ways and now the trend is the government recommends mediation,” he explained.

In this series of one-day workshop activities, facilitators Tommy Kristiawan and Yuniawan used a visualization and storytelling approach to explore experiences and discussions related to conflict resolution from each participant. The presentation of material by Godwin Limberg from Daemeter Consultant also warmed the atmosphere of the discussion.

Godwin Limberg from Daemeter Consultant was present as a speaker who provided enrichment on the results of the conflict cost study from the palm oil sector. The results of the study show that the costs of tangible conflicts borne by companies in the oil palm sector can reach 50-80% of the plantation operational costs. While the intangible costs are much greater.

One participant, Fauzan, responded to the findings with his experiences in the field. “To enter ISPO, companies have to, but the requirements are difficult, we run out of energy. If there is a benchmark like this, how much will it cost or if not the composition can help formulate a formula to prevent conflict, he explained.

Meanwhile, another workshop participant stated that the results of this study could have an impact on business certainty. “With this formula, to prevent or possibly resolve conflicts, it can attract investors because of the certainty of doing business,” he said.

The warm discussion continued to be guided by the facilitators. All participants were grouped into two large groups. Each participant had the opportunity to explore the things he had done to resolve conflicts in the workplace and then tell the story by taking turns in groups.

Meanwhile, another participant shared his experience as an HRD (Human Resources Department) staff who, although rarely deals with conflict resolution matters with parties outside the company, is responsible for resolving internal conflicts. Interestingly, the internal conflicts he had to deal with often involved conflicts between migrant company staff and company staff from the region or often referred to as sons of the region. This is often found in conflicts between companies (immigrants) and local communities (sons of the region).

This one-day workshop was closed by the appreciation of the participants who assembled the points in the discussion into a unique collaboration presentation, rap style. Like the previous series of KADINDA workshops, this one-day workshop in Palembang aims to gather important things that can be used in developing a conflict resolution system for land-based companies that is being developed by KADIN Indonesia.(RN/CRU)

Photo caption: One of the participants in the workshop on Effective Conflict Resolution Strategies for the Land-Based Business Sector in Palembang on Wednesday, 28 March 2018.