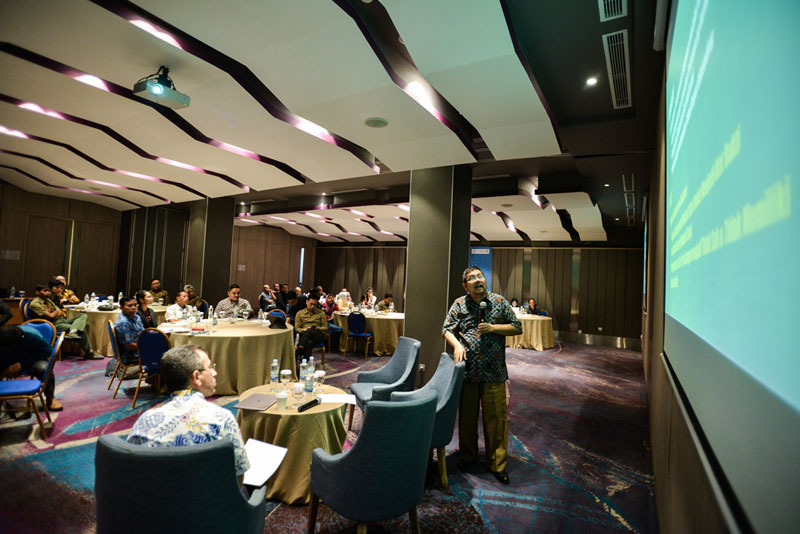 The smart practice of natural resource mediation means a win-win solution or in other words satisfying the parties. This satisfactory agreement fulfills the interests of the parties and provides hope for a complete resolution of the conflict.

But how to achieve all that? Not an easy thing but nothing is impossible as long as there is a will to resolve the conflict. Thus the optimism spread by Prof. Indra Bastian, Head of the Indonesian Mediation Center at Gadjah Mada University in the first exposure session in the Mediator Discussion event which was held on Monday, June 25 2018.

“We need to apply the right principles in mediating and negotiating as a smart way to resolve conflicts,” said Prof. Indra in his opening to the discussion participants. This correct principle was summarized in his presentation entitled Smart Practices for Mediation of Natural Resources Conflicts with a case study of the Kebumen Urut Sewu conflict.

In solving agrarian and natural resource cases, cases are often encountered that are always repeated. The same thing happened in the Urut Sewu conflict. The conflict started in 2007 and grew until 2011, then reappeared in 2013.

In an effort to carry out the correct mediation process so that an agreement can be reached that is acceptable to all parties, the mediator team begins with the pre-mediation stage consisting of the stages of analyzing natural resource conflicts, designing negotiations, initial caucuses and legitimacy.

“SDA disputes are never resolved because competent parties cannot mediate and negotiate transparently, there are always other interests behind them. Therefore, it is necessary to study the interests, behavior and motives of the interested parties,” he said.

Only after the analysis is carried out, a negotiation plan is prepared. The design is made by considering the actors and their interests, the options for the agreement, the BATNA, the emotional connection to the commitment to implementation. This design is then carried over to the initial caucus stage.

The Caucus at the Beginning That Revealed New Facts

In PMI’s research, with the topic of mediation as a technology for resolving business and land disputes (2014), land disputes and conflicts have the characteristics of the parties being difficult to meet and having a high emotional level. Therefore, the mediator must hold a separate meeting (causcus) at the outset. In the case of Urut Sewu, this early caucus succeeded in finding new facts.

“This caucus at the beginning is useful for exploring the core of the problem,” explained Prof. Indra.

“Disclosing this fact opens new hope for the resolution of the Urut Sewu conflict that has been going on for years,” said prof. Indra. A compilation of these options is summarized in the following table:

The legitimacy of these parties will encourage an agreement on a comprehensive and sustainable conflict resolution. If it has been agreed, the peace agreement can be submitted as a peace deed which has permanent legal force and executorial power.

However, what if an agreement is not reached in the mediation process. “If this happens, the existing documents will be destroyed and cannot be used as evidence and the mediators involved cannot be witnesses,” he continued.

From the settlement of the Urut Sewu case, several lessons can be noted, one of which is the need for elements of business mediation, land mediation and public administration. “In this case, the application of political economy is the solution to the root of the problem and the most important thing is smart practices that involve interested parties,” said Prof Indra closing his presentation.

This exposure session is part of the Mediator Discussion activity which is an initiative of CRU-IBCSD to bring together natural resource mediators from all over Indonesia to uncover challenges and smart practices of mediation in efforts to resolve natural resource conflicts in Indonesia.