Press News: Launch of a Practical Guide to Conflict Management 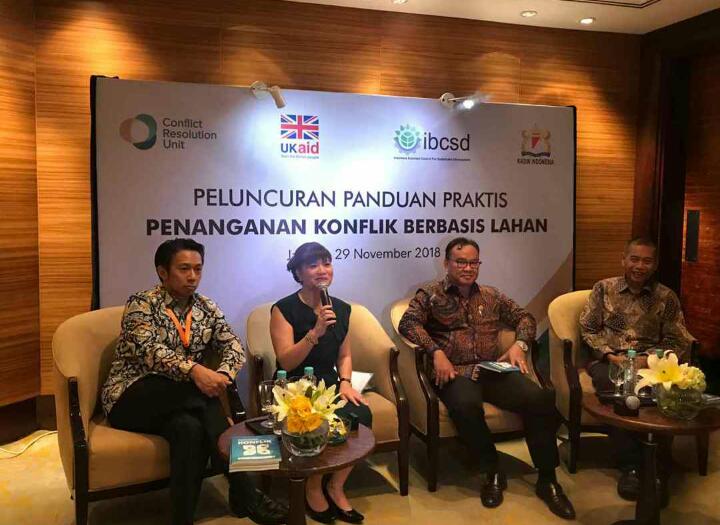 Jakarta, 29 November 2018 – Based on a study initiated by the Conflict Resolution Unit (CRU)- Indonesia Business Coalition on Sustainable Business (IBCSD) in 2006, it is estimated that the tangible losses that occur due to land-based conflicts between communities and the business world reach around US$ 70,000 – 2,500,000. This stems from the risk of lost potential revenue and lost opportunities, including lost profits, staff, legal fees, compensation, or increased production costs. While the intangible losses could potentially reach around US$600,000 – 9,000,000. Another study estimates that there will be a 2-fold increase in consumption costs that must be borne by communities affected by land-based conflicts. This increase was mainly triggered by the disappearance of forest products for consumption which all can be obtained free of charge.

Based on this study, the Indonesian Chamber of Commerce and Industry (KADIN) together with IBCSD launched a practical guide to conflict management for land-based companies. This guide was launched on 29 November 2018 in Jakarta. Present at the launch, the Minister of Agrarian Affairs and Spatial Planning/Head of the National Land Agency, Sofyan Djalil who gave the keynote speech. Moazzam Malik and IBCSD President, Shinta W. Kamdani.

The launch of the guide is also based on the awareness of the importance of building an effective and effective conflict management system in every stage of sustainable development. With the awakening of awareness, each party, including business actors, can begin to contribute to conflict resolution efforts that are tailored to their respective capabilities.

“Awareness is needed to manage conflict, so that losses can be minimized and can be a starting point for new, more constructive relationships considering that conflict causes losses for all parties,” said Shinta W. Thursday (29/11). Shinta added that this Guide was developed as a tool to help companies deal with conflicts effectively, so that businesses can run according to plans and run in line with the interests of the community.

The Minister of ATR/BPN, Sofyan Djalil who was also present at the launch of the Practical Guide said, “The government is very serious in dealing with land conflicts. Several attempts have been made. Therefore, we strongly encourage the efforts made by KADIN, such as today with IBCSD and UKCCU in dealing with conflicts.”

Sofyan added, Settlement through state administrative courts and/or general courts generally takes a long time. Not a few of the parties were dissatisfied with the court’s decision, and made various legal remedies, so that the dispute resolution became protracted. For arbitration itself for land dispute resolution, until now no one has used it. Other alternative dispute resolution mechanisms are important in the context of land conflicts to obtain a win win solution.

A number of representatives from business actors attended the event, including PT Rimba Makmur Utama, PT Riau Andalan Pulp & Paper, Sintesa Group and Siam Cement Group Indonesia. The business world welcomes the preparation of this guide. It is hoped that better conflict resolution procedures will help reduce the number of land-based conflicts and promote the growth of a sustainable business climate.

The Indonesia Business Council for Sustainable Development (IBCSD) is an association born from the initiative of a group of companies committed to promoting sustainable development through sustainable economic growth, ecological balance and social progress. IBCSD provides a place for businesses to share and promote business practices in managing risks and taking advantage of opportunities to achieve sustainable development. IBCSD also acts as a partner with the government and civil society providing input from the business side and solutions for Indonesian policies on sustainability issues.

The Conflict Resolution Unit (CRU) is an initiative of the Chamber of Commerce and Industry (KADIN) to support efforts to mediate conflicts over land and natural resources in Indonesia. In carrying out its mission, the CRU was incubated through IBCSD, an association of business actors who are members of KADIN to support sustainable development from various sectors. The CRU was established to increase public confidence that mediation is an effective and effective alternative to resolving land conflicts and natural resource management in Indonesia. For this, the CRU provides various supports in the mediation process so that the process runs according to best practices such as the development of a national referral system for mediators of land and natural resource conflicts, capacity building through training and capacity building for mediators, business actors, non-governmental organizations (NGOs). , government agencies and other strategic partners, as well as support for various research related to land conflicts. This initiation is also the commitment of KADIN in promoting sustainable business practices that are fully supported by the United Kingdom’s Climate Change Unit (UKCCU). Information about CRU can be accessed through https://conflictresolutionunit.id.